On the Brand Trail: Portland, Oregon

When I travel, I turn into a brand anthropologist: I gawk at, and photograph, names and signs that locals take in stride. Last week’s brief trip to Portland via Coast Starlight was no exception. 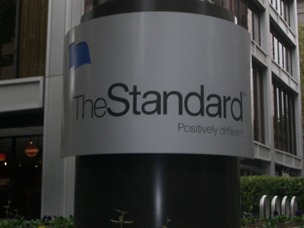 TheStandard (yes, one word), a division of StanCorp Financial Group (of course), is an insurance company that may or may not be based in New York—the website is maddeningly vague. I’d never heard of it before last week.

What caught my attention was the tagline: “Positively different.” The blue flag emblem suggests the “banner, pennant” definition of standard, but the word has multiple meanings, and I couldn’t help being slightly puzzled: Isn’t the whole point of a standard that it’s positively the same at all times?

Food carts are at least as big a phenomenon in Portland as they are here in the Bay Area, with one major difference: Here the carts are nomadic; you need to follow them on Twitter to figure out where they’ll be heading next. In Portland, the carts are permanently parked along a couple of busy downtown sidewalks. 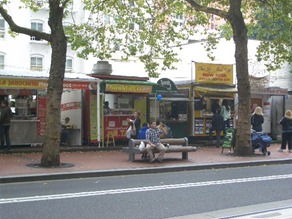 A small sampling of the dozens of food carts on Alder Street.

This takes a lot of the serendipitous fun out of the whole affair; but, on the other hand, it’s in keeping with Portland’s polite, orderly vibe. (Such courteous drivers!) 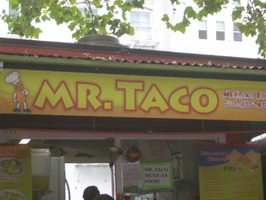 I saw a second Mr. in Southeast Portland; a friend was driving so I couldn’t shoot the sign, but I later found it online.

I’m sure top hats are a big hit with today’s prom-goers.

Mr. Formal operates stores in Oregon, Washington, Idaho, and Arizona; its slogan is “Tuxedos for All Generations.” Isn’t it cute the way the cross-bar on the F resembles a bow tie?

Finally, at the Portland Art Museum—the oldest art museum in the Pacific Northwest—I spotted this sign. 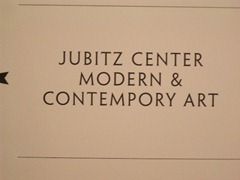 Photography is verboten, but the very nice security guard made an exception for me.

It seems to me that if you go to the effort and expense of building a center of modern & contemporary art, you could at the very least spell contemporary with all its syllables. And maybe spell out “and.”

I do, however, like the way the museum’s logo highlights “art”:

Posted at 10:51 AM in Culture, Errata, In the Wild, Insurance, Naming, Restaurants, Retail, Signs, Slogans and Taglines | Permalink

On the upside, I mostly like the Mr. Formal logo, but for that capital L at the end, wHicH makEs It Look KInda LiKe a ranSOm noTe.

They do their best to hide the fact on their website, but The Standard is based in Portland.