Names in the Wild: Qdoba

There are Qdoba Mexican Grills in Baton Rouge, Bryn Mawr, Boston, and Bloomington, but there’s not a single one in coastal California north of Los Angeles County, which may explain why I first encountered the restaurant, and the name, away from home—in Portland, Oregon, to be precise. 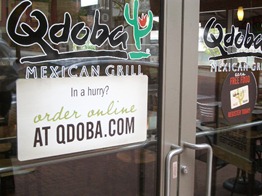 My first reaction: Yet another qrazy Q-name! My second: How is it pronounced—K’doba? (Nope: It’s Kyü-do-bə, according to the website.) And finally: What the heck is it supposed to mean?

1. Something to do with Córdoba, the city in Spain. Which might make sense if this were a chain of Spanish restaurants.

3. It’s inspired by adobo, a peppery marinade or seasoning mix used in the Southwest United States—or a cooking process popular in the Philippines. Only with a feminine ending. And a Q because . . . ¿quién sabe?

4. It means nothing. Qdoba.com happened to be available when the chain launched its website.

UPDATE: On Twitter, nancycc (of the excellent Nancy’s Baby Names blog) forwarded an article published in QSR magazine about Qdoba, which was originally called Z-Teca. The name change was effected by Terry Heckler of Heckler & Associates, a Seattle ad agency; according to the article, Heckler is also responsible for naming Starbucks (in 1971) and the Panera Bread chain (originally the St. Louis Bread Company). According to Heckler, Qdoba means nothing . . . and that’s its virtue. (BTW, QSR stands for quick-serve restaurant, the industry term for fast food.)

>"Which might make sense if this were a chain of Spanish restaurants."

I laugh. As if most folks made such keen distinctions. :-)

I have no idea -- but would amend your guess No. 2 to note that "barbecue" is still standard spelling at effete East Coast publications. Hence:

Qdoba in Boston was just down the street from my former office. My co-workers and I wondered how to pronounce it and what it meant. How fun to see it mentioned again! Thanks!

The enterprise of the illustrious Qdoba family?

I love making suggestions, but this time I haven't a clQue .