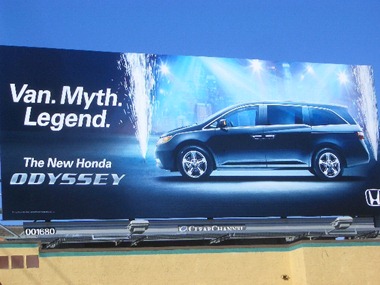 Posted at 06:20 AM in Advertising, Cars and Motorcycles, Music, Myths, Slogans and Taglines | Permalink

"The van beckons." But if it offers you candy, children, run away very quickly.

Interesting choice of music. Just as it got to the point where I was expecting "... gopher guts are blue..." the van doors opened and some (admittedly not blue) stuff came pouring out.

Nice comment about the smoke-avoidance. I would add that the sudden appearance of flames in what I first took to be a rear-view mirror (but on inspection is a TV monitor, it seems) did not put me in the mood for romance. Fire is not something I want to associate with my car.

Why not just stay home?