Word of the Week: Mansplain

Mansplain: To explain something to a woman in a patronizing manner that “takes it as a given that she doesn’t already know whatever it is he is going to tell her.” (From a February 2010 Fannie’s Room post on “the art of mansplaining.”) Coined from man plus explain.

The earliest citation I found for mansplain is an April 25, 2009, entry in Urban Dictionary. This definition maintains that either sex can be guilty of mansplaining; however, most of the writing about mansplaining assumes that the ’splainer is indeed a man. As, for example, in this May 2009 essay on mansplaining by Karen Healey:

Bonus points if he is explaining how you are wrong about something being sexist!

And in January 2010 Kate Harding wrote:

Here’s a thing about mansplaining and why I care a lot about it: it is annoying, and frustrating, and insulting, and deeply rooted in institutionalized sexism, and often profoundly harmful to women. We talk about all of that. What we don’t always talk about is how easily it shades into gaslighting: your reality is false, my reality is true. The biggest mansplainer I’ve known made me doubt my sanity for years; I am still recovering. This isn’t just a supremely sexist and problematic internet habit. It can be a psychologically violent act.

(Gaslighting is a form of psychological abuse in which the tormenter makes the victim doubt his or —usually—her sanity. The term comes from the 1938 play Gas Light and from the film adaptations that followed, in particular the 1944 version directed by George Cukor and starring Ingrid Bergman and Charles Boyer.)

Rebecca Solnit, a writer of formidable intellect (Wanderlust, River of Shadows, A Paradise Built in Hell), is frequently credited with spelling out the theoretical underpinnings for mansplain in an April 13, 2008, op-ed column for the Los Angeles Times, “Men Who Explain Things.” She wrote:

Men explain things to me, and to other women, whether or not they know what they're talking about. Some men. Every woman knows what I mean. It's the presumption that makes it hard, at times, for any woman in any field; that keeps women from speaking up and from being heard when they dare; that crushes young women into silence by indicating, the way harassment on the street does, that this is not their world. It trains us in self-doubt and self-limitation just as it exercises men's unsupported overconfidence.

From there, Solnit expanded her argument into the areas of date rape, marital rape, workplace sexual harassment, and the global rights of women. She did not, however, use the word mansplain.

Read “You May Be a Mansplainer If…” on Thus Spake Zuska, a science blog.

Hat tip to Fake Erin McKean, whose September 3 tweet introduced me to the word mansplain (but not the concept, which I've known and experienced for many years). 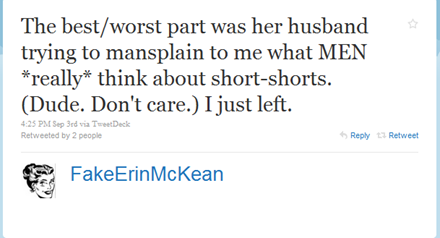 Mansplaining icon from Big Bad Wolf. “Oh, gosh, thank you so much for mansplaining this to us!” has assumed the status of a meme.

From failblog:
http://failblog.files.wordpress.com/2010/09/1ab7e3d8-b0fe-4fc7-b1eb-89a3e9449cc0.jpg
The worst thing about "mansplaining" is the sneaky self-doubt it instills in women and the way it brainwashes us into thinking that we need to rely on men to tell us how to do things. Yuck.
I have to say though, I feel like there is just as much "womansplaining" when we simplify fashion terms, colors or other stereotypically feminine topics. I've changed my vocabulary several times when talking to my boyfriend about a dress I was making, using simpler language and color names that I wouldn't normally use with another woman.

I have seen this most often in the workplace, But I still prefer patronize. And I recently heard one woman say to another, "Don't matronize me."

Interrupt a mansplainer, surely you both have better use of air.

Can you come up with a word for the snide remark a few men make, such as
Rebecca: "My daughter just had her back molar removed and she's been up all night crying."
Rick: "As opposed to the front molar?"

Duchesse: That "molar" comment is what I would call an example of "the Friedman school of discourse." That is to say, it's the sort of "correction" I heard every day around the dinner table, mostly from my father, and as a result am frequently guilty of myself.

"Mansplain" fits a certain niche, but overall I think patronize is still the best word. I like matronize too! Men who "mansplain" are probably just as patronizing to other men. It's not just their attitude toward women, but toward everyone. It's a fault of human nature. Women can give the gaslight treatment too. Incidentally, "Gaslight" with Charles Boyer is a remake of a 1940 British movie of the same name with Anton Walbrook and Diana Wynyard. Overall, the British movie is better than the Hollywood version, though Boyer is fantastic in the role. Vincent Price played the part on Broadway. Now that would have been really interesting to see.

katiecoops beat me to it -- I was just about to post that Fail blog item!

The worst case of mansplaining I ever experienced was completely nonverbal: I was getting my car inspected -- in the old days when you actually sat in the car during it -- and the mechanic reached in my window and tested the directionals himself. Surely I could've followed a simple instruction to push that cute li'l lever up and down myself?

I'd appreciate a little more edification re what "verb of communication" means. Every time I have assessed myself as having been patronized patronized (or used it as a klunky adverb: "He spoke to me patronizingly"), it followed someone speaking to me.

Regarding the molar correction, I asked my son what he would call it; he replied, "Just mean."

I think Duchesse's son put it in a nutshell, "just mean". Thanks!

"Just mean" is a good description for that kind of carping remark, but "snide", "smug", and "snarky" also work.

Personally, I hate the word "mansplain", but then I had 95% of the portmanteau neologisms that have popped up in the past couple of years and been virally spread by bloggers, Urban Dictionary, and other Internet media.

The problem with "mansplain" is not only that it makes me think of Ricky Ricardo's "you gotta lotta splainin to do, Lucy!" (perhaps not an inappropriate reference point, albeit demeaning toward non-native speakers of English), but like many of these neologisms, it is not as vivid (the image it conveys is not as clear) as the well-established expression it is meant to replace, in this case, "patronize" (treat someone the way an overbearing father treats a young child) or, if you need a communication verb, "talk down to" (speak to from a position of supposed superiority).

Also, while it is true that many men do not know how to talk to women in a way that respects their intelligence, surely it is unfair to suggest that this is something all men do or that only men do or even that men do it in a way that women never do. The problem of actually listening to another person and respecting their intelligence and feelings in communication is a universal one, and only stereotypically and parodistically a problem peculiar to men.

Sorry to go on and on, and perhaps I'm falling into a "mansplaining" vortex myself, but I think there is something else that should be said about this word and the phenomenon it tries to capture. The thing Kate Harding and Rebecca Solnit describe as a "psychologically violent act" and a kind of behavior that "crushes young women into silence" merit a less facetious word than "mansplaining". "Patronizing speech toward women", "men's domineering attitudes", "male presumption" are a few possible phrases that come to mind for this kind of insensitive, yet perhaps crippling speech. If one needs a less formal term, perhaps "being a jerk" would fit.

I was JUST mansplained to, by a friend of mine--I don't think he really realized what he was doing.

I had posted a link on facebook and criticized the fact that most female superheroes wear heels, and that really puts them at a disadvantage in fighting crime (and in believability, but whatev), which is pretty much for the sake of male readers/viewers. Women in heels fall into the mainstream beauty ideals, despite heels being very bad for the health of womens' legs, ankles, and feet (while making them aesthetically pleasing), hindering balance and running capabilities, etc. It's just not rational to put crime fighters in heels. He mansplained: "Seems to me that a good reasoning for this could be the whole idea of super heroines: to empower the female and her femininity. Heels are often associated with power, height, status, sexiness therefore furthering the empowerment of women kickassness."

Definitely not a bad case of mansplaining, but having a man explain to me that heels empower women was pretty off-putting. I mean, many women might feel empowered in heels. But superheroines? As in Wonder Woman, She-Hulk, etc.? They a) have no choice in wardrobe, b) tend to have male designers and artists, and c) fight crime. But I guess nothing empowers crime fighters like being off balance and hindering mobility.

I am a dude, and I have a sister who is constantly barraging me with mansplaining behavior. In my case, it's because I am a mere liberal arts grad, and she has an engineering degree (which obviously makes her my intellectual superior! she programs computers!). Oh, the hours wasted on prying myself away from condescending, one-sided conversations on everything on web design (which I sort of studied extensively, but it doesn't matter because she PROGRAMS COMPUTERS) to current events and literary criticism (which I sort of have studied my entire life and she is woefully uninformed about but PROGRAMS COMPUTERS so there)!

What's worse is all of her male programmer friends do it, too. They're even worse with it. Some of them even do it to HER. This doesn't, however, make my sister stop and think about it in the slightest. It must be an engineer thing.

Anyhoo tl;dr I feel you, ladies. Men folk gotta cut that shit out.