Back in May, E*Trade annoyed me with its “tech-tosterone” ad. Now it’s setting my teeth on edge with this: 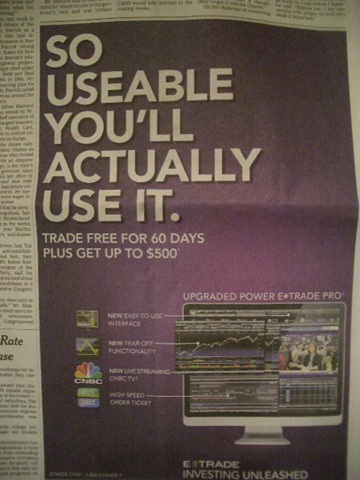 I consulted three dictionaries and Garner’s Modern American Usage*, the authoritative dispute-settler in matters of style. All agree: it’s usable, not useable.

Yes, you’ll see useable in some dictionaries, but that’s because dictionaries don’t judge, they report. If an error is common enough, a dictionary may include it, but not as the preferred choice. Garner, however, toes the prescriptivist line:

Flip back to the MUTE E entry and you’ll read four paragraphs of clear explanation. Here’s the most relevant passage:

In AmE [American English], the rule is to drop the –e before a vowel. But the almost universal exception to this rule is to keep the –e if it’s needed to indicate the soft sound of a preceding –g- or –c-, as in change, changeable; hinge, hingeing; trace, traceable.

Still not convinced? Let’s pit the two words against each other in a GoogleFight. 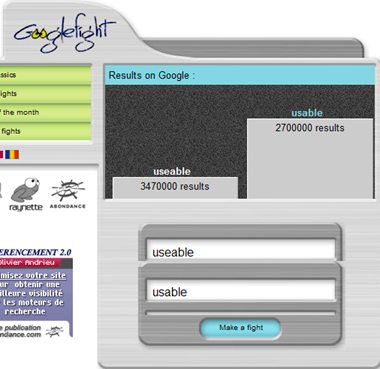 The people have spoken! E*Trade, are you listening?

Posted at 06:36 AM in Advertising, Economy, Spelling | Permalink

It totally blows my mind that someone could make such an egregious mistake. Not to mention 3.47 million others, as shown by your Google results.

I'm okay with the language changing as a result of evolution, but not because of ignorance.

Given the dismal state of American investment industry, do you think they might want to distance themselves by adopting the British style? Heh.

Duchesse: "Usable" is the preferred spelling in British English as well. (See OED.)

Should have said, "a British style". I think the intention might be to Anglicize the tone. The distilleries who write of "ageing" their whisky intend that.

Here in Canada, I've seen a resurgence of that variant spelling, rather like calling vendors purveyors.

Duchesse: Highly doubtful that E*Trade had a British effect in mind. As for "ageing," please see my citation of Garner re: mute "e." Words with "g" and "c" are the exceptions.

I find this post quite likable; however, more and more people would call it likeable. The Oxford American Dictionary cites "likeable" as an acceptable alternate spelling. I don't like it.

Michele: A second-place inclusion in a dictionary does not mean that the spelling is acceptable; it means that it occurs frequently enough to merit acknowledgment. Dictionaries are in the reporting business, not the judging business. For judgments, we turn to Garner, the AP Stylebook, Chicago Manual of Style, etc. (in the U.S., anyway).

Alas, while we know the dictionary's inclusion of an alternative spelling does not mean it's correct or acceptable, the average person assumes that if it's in the dictionary, it's okay. This is why I wish dictionaries would include only the correct forms.

Michele: But "correct" is constantly in flux, and dictionaries are our best record of that flux.

I am totally baffled by the reporting of the Googlefight results. 'Useable' gets 3.5 million to 'usable's 2.7 million yet 'usable' gets a higher bar and you're claiming it wins the fight? Or do those pure numbers mean something else?

(TypePad's spellchecker flags "useable" as incorrect, although MSWord's does not! Go figure.)

"Useable" is an understandable one, to me. Ahoy!

I'm rather a stickler, but this would be a new variant I could accept. In the word "Usage" the s makes a [s] sound, whereas in "used" and "user" (s follwed by e) it makes a [z]. There are many words in English were "se" makes a [z] (exercise, abuse, fuse... even more in British spellings). But I can't think of many examples of "sa" making sounding like a [z]. It makes some phonetic sense to put that e in there.

So would anyone think of writing "proposal" or "disposeable"? I doubt it. But "usable" is much shorter and offers fewer clues, making it easier to mispronounce it at first glance as "us-able".