This full-page ad from Thor Equities appears in today’s New York Times on Page 11 of the business section. 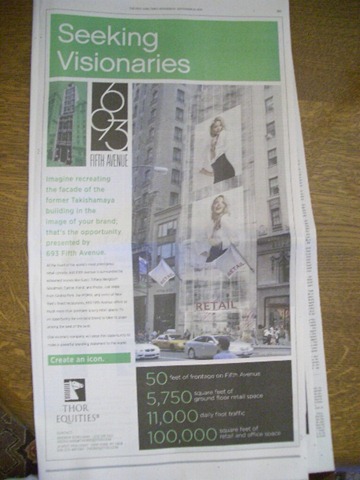 Imagine recreating the facade of the former Takishamaya building in the image of your brand; that’s the opportunity presented by 693 Fifth Avenue.

Whoops: The name of the Japanese retail store chain, which was founded in 1829 and until June of this year occupied 693 Fifth Avenue, is spelled Takashimaya, not “Takishamaya.”

And here’s the kicker, in the closing paragraph: 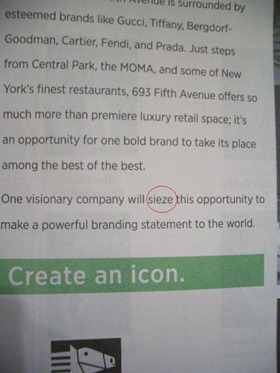 I’m having a seizure.

P.S. As long as I’m making changes, I’d circle the semicolon in that paragraph I quoted above. A colon or a period would be make the statement more powerful.

Aaargh. And I really miss Takashimaya.

Am I slow; or have they left in some words the didn't mean to?

"Imagine recreating the facade of the former Takishamaya building [in the building] in the image of your brand..."

Yes! I also find the sentence choppy and confusing. What are they trying to say? A facade is "on" not in something and "building in the building in the image" can only be called road kill(We know something ugly is out there but we don't know what it is yet). I'd like to offer ," Imagine recreating the facade of the former Takashimaya Department Store in the image of your brand. That's the opportunity presented at(not by)693 Fifth Avenue.

John, Nick, and Rolig: The redundancy was entirely my error, and I've fixed it. Yes, I need a proofreader, too, especially at 7 a.m.!

It's a perfect example of the McKean Effect: "Any correction of the speech or writing of others will contain at least one grammatical, spelling, or typographical error." http://en.wikipedia.org/wiki/Erin_McKean