Coke with a Splice

A comma splice, that is. 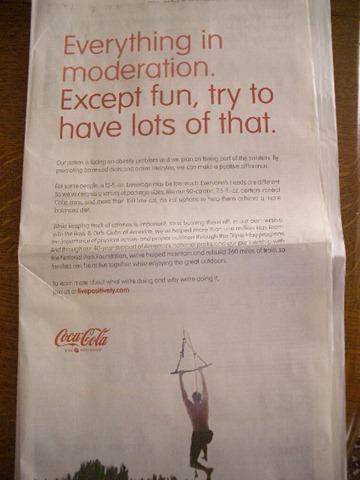 The ad appeared in the San Francisco Chronicle last Sunday. It’s an opening salvo in Coca-Cola’s Live Positively campaign, an expensive-looking effort to convince us that Coke is all about healthy living and being “part of the fabric of our communities.”

So much money, so little proofreading.

Here’s my gripe: The second sentence in the headline is an example of a comma splice—also known as a run-on—in which the comma is called upon to do the work of a period.

This isn’t merely about “rules.” It’s about effectiveness. The run-on headline is insipid; breaking it up with a period gives it a pulse. The energy builds up to fun, the most important word in the headline, instead of dribbling away in a fog of inconclusion.

It’s painful enough to see badly punctuated copywriting in small businesses’ ads. It hurts like a decayed tooth to see it from a major brand like Coca-Cola.

As penance, perhaps Coke would like to underwrite National Punctuation Day. It’s next Thursday, September 24.

UPDATE: Thanks to Twitter pal McGeesOrg for two timely links about comma splices: "Oh, the Splices You'll See!" on Stan Carey's blog, and "Comma Splices: How to Identify and Fix Them" on The Snarky Student's Guide to Grammar.

Posted at 11:03 AM in Advertising, Punctuation | Permalink

I think an em dash would work quite nicely there.

I was thinking an em dash too. But you are right as always. A period creates the proper rythm. It's a real stretch to call Coca Cola® “part of the fabric of our communities”? A good beer maybe, but soda pop is just fizzy and sweet. (Personally,I prefer Safeway brand seltzer water. With a shot of bourbon.)

Em dash was my first stop, pun intended, and I bow to your refined taste. But you can't put lipstick on inert sugar, period.

A period does work nicely for rhythm's sake. But I vote for a colon: it's not as histrionic as an em dash, and it creates a subtle connection that's lacking with the period.

Green Caret: Nothing wrong with a colon, grammatically speaking, but it's too formal for a soft-drink ad. I still say a period is the best choice here.

An appalling example of 'graphic artists rule, OK'. But I blame whichever marketeer signed it off -- because we all know graphic artists are illiterate: it's written into their job description.

Taking this apart, I think I know how this happened. Swapping the comma and full stop (period)would have meant graphically the headline would have needed to run to an extra line, "...which wouldn't have looked as good" (graphic artist speaking). I can see him/her stamping his/her feet even as I write.