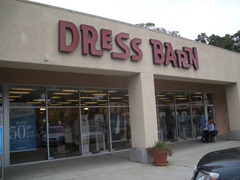 1. Dress Barn Group, the parent company of discount clothing chain Dress Barn, will seek shareholder approval for a name change to Ascena Retail Group, Inc., or Ascena Retail, Inc. The company was founded in 1962 in Stamford, Connecticut, and now has more than 800 stores through the United States; it also owns Maurices, which caters to style-conscious 20-somethings, and Justice, for girls 7 to 14. (Justice is a direct descendant of Limited Too.) The three retail brands would become subsidiaries of Ascena and would presumably retain their respective names. “The objective was to have a neutral kind of name, so you can have a family of brands underneath and not feel like they're reporting to Dress Barn,” Dress Barn’s chief financial officer and executive vice president, Armand Correia, told Bloomberg News. The retailer met with “outside experts” and chose Ascena “because it’s reminiscent of the word ‘ascend,’ Correia said.” The renamed company’s ticker symbol on Nasdaq would be ASNA, which unfortunately is the Spanish word for “female donkey.” It’s unclear how “Ascena” is meant to be pronounced: ah-SEE-na? ah-SAY-na? ass-SEEN-ah? Perhaps Dress Barn is attempting to cash in on the “ass” trend in women’s retail. (Hat tip: MJF.)

2. The Tea Party Bookshop in Salem, Oregon, is changing its name to Tigress Books. Owner JoAnne Kohler, who opened the shop in August 2008, chose the original name because she liked the association with the “independent, anti-corporate, more forward-thinking aspects of the Boston Tea Party,” reports Salem Live. The store stocked lots of spiritual and personal-growth titles, held monthly poetry readings, and sponsored a pagan meet-up. Then came the Tea Party political movement and considerable confusion for Kohler’s patrons. Long story short: the bookstore will be renamed Tigress Books (slogan: “Wildly Independent!”). Why Tigress? “A Buddhist monk told me in order to move forward you have to be a tiger,” Kohler told Salem Live. “When I was thinking about new names I thought ‘oh, that’s a good name. Be a tiger. Be a tiger!’” (Via The Naming Newsletter.)

3. Starting September 16, the weekly public-radio program “Speaking of Faith with Krista Tippett” will be called “Krista Tippett on Being.” In the show’s blog, Tippett confesses that she wasn’t wild about “Being” at the outset. “But I have come to love the title. . . . ‘Being’ is an elemental, essential word. It was a catchword of the existentialism of the 20th century, and existentialism is making room for spiritual life in the 21st. It is more hospitable than the word ‘faith’ for our non-Christian and non-religious listeners. It is, at the same time, an evocation of the primary biblical name of God. ‘I am who I am’ can be better translated, I recall my teacher of Hebrew pointing out, as ‘I will be who I will be.’” More than 300 readers posted comments about the name change, and the next day the show’s managing producer, Kate Moos, added her own comments: “One, we’ve incorporated Krista’s name into the title prominently because we wanted it very clear that Krista remains central to the show as host and editorial leader. But I want to assure you that, in most applications, the new name will be heard as Being.” (Via Grant Barrett.)

4. The Nevada Test Site, established in 1951 for the testing of nuclear devices, will henceforth be known as the Nevada National Security Site, or N2S2. The new name reflects “the diversity of activities at the desert expanse north of Las Vegas,” the Associated Press reports. “Sounds like a video gaming console … only way more extreme,” comments On the Button, a naming blog.

Posted at 06:45 AM in Naming, Radio, Religion, Renaming, Retail | Permalink

That's too bad about the Tea Party Bookshop.

The story reminded me of the band the Hooters, who recently finished their 30th anniversary tour. What's their reaction to the restaurant chain with the same name (minus the "the")? Does it affect them in any way?

“ 'The objective was to have a neutral kind of name, so you can have a family of brands underneath and not feel like they're reporting to Dress Barn,' Dress Barn’s chief financial officer and executive vice president, Armand Correia, told Bloomberg News."

Barbara: As far as I can tell, the retail stores will still be called "Dress Barn"; only the name of the parent company will change. Go figure.