Names in the Wild: Putzmeister

This guy was blocking a big chunk of my street the other day. He took the word right out of my mouth. 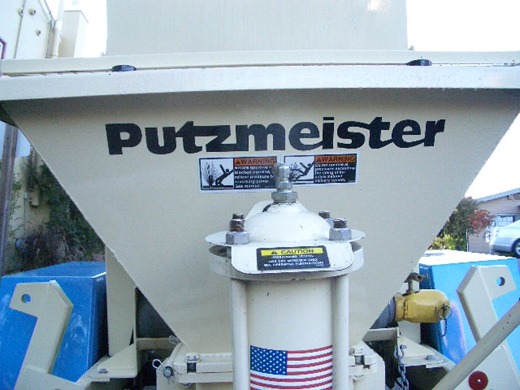 Not just a putz—a putzmeister!

Oh yeah, the Stars and Stripes makes everything copacetic.

But seriously, folks: Putzmeister America, based in Sturtevant, Wisconsin, manufactures concrete and material-placing equipment. Its parent company was founded by Karl Schlecht in Germany in 1958 as KS-Maschinebau; according to the corporate timeline, the name was eventually changed to Putzmeister, which the website translates to “plaster master.”

In Yiddish, of course, putz means something rather different. Leo Rosten writes in The Joys of Yiddish, originally published in 1968:

Literally, putz is vulgar slang for “penis.” But the vulgarism is rarely used to designate the member; the word shmuck does that.

Rosten ends the entry with this postscript:

CAUTION: Putz is not to be used lightly, or when women or children are around. It is more offensive than shmuck; the latter may be used in a teasing and affectionate way, vulgar though it is, but putz has a pejorative ambience.

According to the Wikipedia entry for The Joys of Yiddish:

In 1998, Charles Schumer and Al D’Amato were running for the position of United States Senator representing New York. During the race, D’Amato referred to Schumer as a putzhead. The New York Times referenced the entry for putz in The Joy [sic] of Yiddish and maintained that the phrase did not merely mean “fool”, as D’Amato insisted, but was significantly more pejorative. Based on that entry, a better translation might be “dickhead”.

For another example of a brand name that probably sounds better in its country of origin than in the U.S., see my post on Sikkens.

Posted at 06:43 AM in Bad Names, In the Wild, Naming, Slang, Translation | Permalink

Maybe Schumer deserves a hearty perjorative but that kind of situation just illustrates why a person (especially politicians & celebrities) surrounded by cameras should keep their vocabulary slang free. Use precise language: either call him an obnoxious idiot or stick to straightforward talk: "I believe my opponent is misguided on this issue because [insert fact]."
Remember when Theresa Heinz (aka Mrs. John Kerry) called some group of people "scumbags"? The generally accepted meaning is a contemptible person, but the origin of the word refers to a used condom. Just don't use the word in public.
There is a manufacturer of RV generators called Cummins Onan, which induces smirks among some people.

Some people near and dear to me (they're family) have the surname Putz. So many European names were needlessly Americanized, but this one...I dunno. I would have been tempted.

Oh, that's weird. As a German speaker I saw the picture and thought 'plaster master - quite a good name, actually'. I didn't realise the word would have such a different meaning in Yiddish. I find that I can understand Yiddish conversations pretty well because it's so similar to German, but it just goes to show that you can never make assumptions...

Do you know about the Schwing? I remember looking out the Ask Jeeves office windows in Emeryville, watching construction crews working with this concrete pump system. http://www.schwing.com/01_cpumps/index.html We were highly amused.