Names in the News: Kwiat

David S. Kwiat, former president of the Kwiat jewelry company, died August 9 at the age of 94. According to his obituary on the Kwiat blog, Mr. Kwiat was “an icon in the diamond industry and will be long remembered for his sharp mind, his love of diamonds and his reputation for integrity. …His clients included many of the world’s preeminent diamantaires and retail jewelers, including Harry Winston, as well as many in New York’s high society.”

I was interested in that word diamantaire, a French word that may mean “a professional in the diamond business,” “one who buys or sells diamonds,” or “a master diamond cutter.” But I was even more interested in the Kwiat name, which I’d seen in advertisements and in what-the-celebrities-are-wearing stories in magazines such as InStyle, but which was otherwise something of a mystery to me. 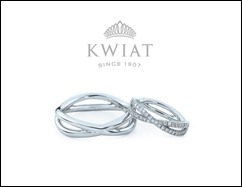 I hadn’t known, for example, that “Kwiat” was an eponym just like Shreve (a Bay Area institution) or Tiffany. I’d never encountered anyone with the Kwiat surname, and I wasn’t sure how to pronounce the name. (It’s KWEE-aht, according to “How Do You Say Kwiat?” on the company website.)

Here’s what Ancestry.com says about “Kwiat”:

Polish and Jewish (from Poland): from Polish kwiat ‘flower’, a metonymic occupational name for a florist or a gardener. As a Jewish name, this is generally of ornamental origin.

The Polish pronunciation would be closer to KVEE-aht.

“Kwiat” is a rare surname in the United States—the Ancestry.com map, taken from U.S. Census records, shows only a handful of Kwiats, most of them east of the Mississippi. But that’s a misleading picture, because “Kwiat” sometimes changed its spelling. Abel Kiviat, for example, a silver medalist in track and field at the 1912 Olympic Games in Stockholm, was the son of Moishe Kwiat, peddler, who Anglicized his name to Morris Kiviat. That tidbit comes by way of an email from linguist Marc Picard of the American Name Society listserv. Marc added:

The epenthetic vowel is not surprising given that /kv/ is an impermissible initial consonant cluster in English.

As for David Kwiat, he joined his father’s business at the age of 17, in 1933—not an auspicious year for luxury goods. Nevertheless, according to his obituary, “despite the difficult economic conditions of the Great Depression era, the business grew throughout the decade.” David Kwiat remained active in the business until the end of his life; his grandchildren now run the company.

Read my December 2008 post about selling diamonds in an economic downturn, “Stones.”

Posted at 09:55 AM in Advertising, Eponyms, Jewelry, Names in the News, Naming, Retail, Words | Permalink