This brand name certainly got my attention. 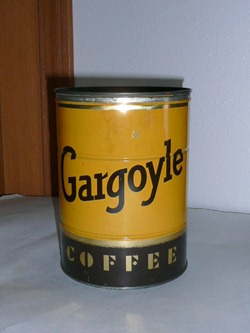 First things first: Is that not some seriously beautiful typography? I'm especially taken with the stylized stencil font for “coffee.” According to GoAntiques.com, which is selling the coffee tin, Gargoyle brand coffee was produced in Milwaukee, Wisconsin, by the O.R. Pieper Company. A bit of online sleuthing revealed that O.R. Pieper was a wholesale grocery company incorporated in 1918. The History of Milwaukee, City and County, Volume 2 (published in 1922) informs us that Mr. Pieper “always carried goods of the highest quality—goods known for their superiority and excellence.”

So it’s a good gargoyle.

Actually, gargoyle is a neutral term. The word comes from French gargouille, which means “throat” or “gullet.” (English gargle has the same origin.) In architecture, a gargoyle is a spout that carries water away from a building; the grotesque designs are mostly ornamentation that over time became a convention. According to a Wikipedia entry, gargoyles often are designed as elongated fantastic animals “because the length of the gargoyle determines how far water is thrown from the wall.”

I wish I knew the reasoning behind O.R. Pieper’s choice of “Gargoyle” for a coffee brand, but the trail goes cold after GoAntiques and the history book. If any Milwaukee historians wish to enlighten me, please leave a comment.

Hat tip to my brother Michael, who discovered an ad for Gargoyle  among our late mother’s effects. She was a Milwaukee native.

Related: Read my post about MJB Coffee. More items from the Friedman Museum of Vintage Products here and here.

Posted at 06:11 AM in Branding, Design, Food and Drink, Naming, Nostalgia, Packaging | Permalink