Last week I wrote about the booty-fication of American brands, as evidenced by Old Navy’s Booty Reader and Booty Pop Panties. Once upon a time, a slang term like booty would have been an advertising taboo (tabooty?). But once the barriers fall, they fall hard. Booty now seems as innocent and quaint as “You bet your sweet bippy.” 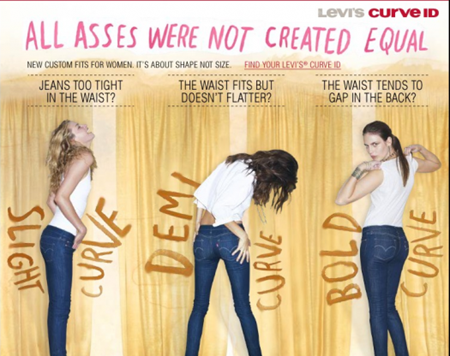 “All Asses Were Not Created Equal”: Now, there’s a rallying cry for a new generation.

Please correct me if I’m wrong, but I’m pretty sure this is the first time ass has been used in a major retailer’s advertising. Or any big company’s advertising. Of course, we’ve been seeing creeping ass-ification in the vernacular for several years. It was way back in 1992—in the “Homer the Heretic” episode of “The Simpsons”—that Homer Simpson uttered “You bet your sweet . . . ass!” Which prompted a massive outcry of  . . . meh.

(Hat tip to Sally at Already Pretty for the Fashionista link.)

So the ladies’ derrieres are, so to speak, covered. But what about the gents and their rear ends? Well, Lee Jeans—a denim company almost as old as Levi Strauss—has risen to the challenge, or the bait, although the language of its advertising is distinctly more timid than Levi’s. New spokesman Mike Rowe, creator/host of TV’s “Dirty Jobs” show, talks about Lee Premium Select jeans in ads that emphasize the product’s comfortable fit. Oh, and by the way, Rowe says, a little sheepishly, “My girlfriend says they make my butt look good.” (Even the famously taboo-avoiding New York Times used that line, without comment, in a review of the campaign.)

In a Web-only ad, Rowe borrows a phrase from the Old Spice man and asks to have a word with “the ladies.” Because guys (straight ones, anyway) don’t care how their butts look, right?

I sense an air of desperation in Levi’s and Lee’s attempts to talk dirty, as though they’re frantically trying to keep up with badass jeansmongers such as Rock & Republic, whose styles bear names like F#@k Me B#@!h. So far, though, I’ve seen exactly zero protests of the new ads’ language. But that may change when the campaigns move away from the coasts and into more conservative regions of the country.

* Am I the only one who thinks the curve ratios of the three asses in the ad look virtually identical? Frankly, none of those gals is what a rational person would call voluptuous.

I never thought I'd find myself pining for a little decorum, and yet...here I am.

What I want to know is, who got the contract to create the names for those three levels of, um, "curve".

I mean, *that* was a gig to write home to Mom about.

And I'd love to see the naming team's unedited list of suggestions. "Bold", though, that's... brilliant.