When did booty cross the line from vulgarism to acceptable—even ubiquitous—marketing lingo? No doubt the 1997 Jamie Foxx vehicle Booty Call—which critic Roger Ebert called “the raunchiest sex comedy I can remember”—popularized what had previously been primarily street slang.* And the poster provided a helpful visual definition.

In 2010, however, brand booty-fication is less salacious than simply—well, cheeky.

Consider Old Navy’s Booty Reader, an elaborate interactive microsite that announces, “Your future is behind you.” The voice of fortune teller “Madame Eva” instructs the visitor to choose three cards from a punny Tarot deck (“The Social Bootyfly,” “The Busy Booty”) and then purrs in an indeterminate European accent: “The time has come. Show me your booty.” At this juncture you’re meant to upload rear-view video or still shots (“I do my best work when I can see your true booty”) and then receive your booty judgment. (Mine was “Passionistica.” Rowr!) 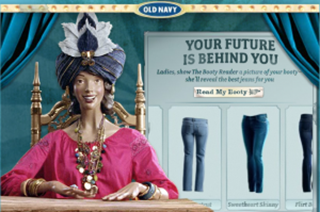 If your natural booty is underdeveloped, you may be a candidate for Booty Pop panties (as seen, naturally, on TV—and also putting the “beyond” in Bed Bath & Beyond). The product consists of ordinary cotton/spandex briefs enhanced with nonremovable buttocks pads that are “strategically placed to create a round, lifted booty.” Available in sizes Extra-Sweet to Super-Sweet. (No, really.)

The brand name was inspired by a 2003 song, “Pop That Booty,” by Marques Houston. (Sample lyric: “Girl, you’re shaped like a Coke bottle/ So let me see you pop your thing full throttle”)

The Wall Street Journal reports that Booty Pop expects to sell close to 1 million pairs of the undies, which so far are available in only one style and four colors: Licorice, Caramel, Grape, and, yes, Cherry. “It’s so not hot to have a pancake a-- these days,” Azar Jazestani, a 26-year-old wedding planner in Montreal, told the WSJ, presumably filling in the hyphens.

“If you wear anything less than a really heavy denim with it, you can see where those oval-shaped things stick out,” says Ms. Homer. She dubbed the situation “VBPL,” for “Visible Booty Pop Line,” riffing off the faux pas of VPL, “visible panty line.”

Readers of this blog will recall other brands in this category, in particular Bubbles (“Take Your Gluteus to the Maximus!”), which makes “butt bras” and “Pick-Me-Up Briefs” for women and Bubble Butt Underwear with Frontal Enhancement for men. Imagine how successful Bubbles could be if it incorporated the magic booty word!

As for the booty call, which got us to this interesting socio-commercio-linguistic pass, it’s the subject of a new academic study by Peter K. Jonason, a psychology professor (may we call him a  booty-call-ologist?) at the University of South Alabama: “Positioning the Booty-Call Relationship on the Spectrum of Relationships: Sexual but More Emotional Than One-Night Stands,” recently published in the Journal of Sex Research. “The booty call is a compromise,” Jonason told Salon.com interviewer Tracy Clark-Flory, “because neither partner wins and neither partner loses.”

Digression: Booty-callmates are known by various terms, including the comparatively mild “friends with benefits” and the acronym NSA, for “no strings attached.” I like the French equivalent: ami calin, literally “kiss-and-cuddle friend,” although calin can also mean “coaxing,” “wheedling,” or “cajoling.” (For other insights, see Boinkology.)

So where does booty come from, linguistically speaking? One meaning of the word, according to the Online Etymology Dictionary, is “plunder, gain, profit.” It came into English in the mid-15th century from Old French butin and, further back, from a Germanic source that meant “exchange.” 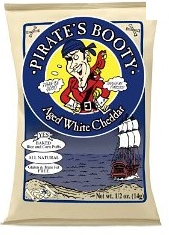 But that’s (mostly) a different booty from the booty call, Booty Pop, Booty Reader booty. That booty (or boody, as it was sometimes spelled) comes from early-20th-century Black English; it meant “buttocks” (of which it may even be a diminutive), “the female genitalia,” or, by extension, “sexual intercourse” or “an object of sexual ambition or desire.” (That last, lovely definition comes from the OED.) A booty bandit is a homosexual rapist.

And now that you’ve traveled this far with me, why not take a little trip back into the archives to revisit a post about -ass affixation? You know: cheap-ass, kick-ass, ass casserole, and the rest of that crazy-ass gang.

I am indebted to Ben Zimmer of Visual Thesaurus for suggesting today’s theme and for providing several of the links.

* Booty Call is also notable for the name of one of its female characters: Lysterine, played by Vivica A. Fox.

Before "Booty Call," surely KC and the Sunshine Band had something to do with bringing 'booty' into the main stream of the English lexicon?

Q. Pheevr: I had completely forgotten about "Shake Your Booty" (1976). And now it's an earworm I shall pass along to all my readers:
http://youtu.be/QpOy4Ro4ISM

I was a little surprised to come across the word "booty" used in a show on the Disney Channel. I hasten to add that the kids were watching it, not me, but I think it might have been "Hannah Montana", which is aimed chiefly at "tweens" (kids up to thirteen).

That would seem to indicate that the word has crossed over into mainstream use when describing the buttocks. I'd think that "booty call" and so on are still too strong for Disney, though.

I wonder if "booty" has any connection with the "boot" of a car? They both are in the same location relative to the body.

Nick: The automotive sense of "boot" (= luggage compartment) comes from the footwear sense. In both cases the word means "a protective covering." It's unrelated to "booty."

In computer lingo, "to boot" is a truncation of "to bootstrap." This sense gained currency around 1980.