« Eurovision English | Main | How Humphry Slocombe Got Its Name »

Word of the Week: Manllow 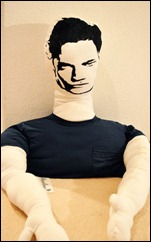 Manllow: A pillow bearing the image of an “ideal man.”

Manllow was apparently coined by self-described “art geek and fashion freak” Lala Liu, whose Manllows shop on Etsy defines a Manllow as “half man half pillow.” The copy goes on to describe Mannlows as “[t]he greatest gift of all time. 105% creepy, 5% loveable [sic] or 105% loveable, 5% creepy. You pick.”

A less-awkward spelling would have been Manillow, but it’s possible Ms. Liu was concerned about legal action from the artist formerly known as Barry Alan Pincus.

Depicted above is the Edward Cullen Manllow (sold out, alas), named for the vampire protagonist of the wildly successful Twilight series, as portrayed by actor Robert Pattison. (This particular example might have more appropriately been named a Vampillow.)

The Edward Cullen Manllow was included in Salon’s “10 Most Baffling ‘Twilight’ Products,” a list that includes condoms, a tampon case, and amber-hued contact lenses. See a slideshow here.

At NU, the girls used to gather around the dorm TV with what they called their "husbands", those reading/TV watching cushions with the little arms on the sides: