How Humphry Slocombe Got Its Name 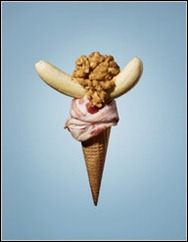 Jake Godby, the 41-year-old proprietor of Humphry Slocombe, in San Francisco’s Mission District, is “the world’s weirdest ice cream man,” according to the New York Times Magazine. For one thing, writes Elizabeth Weil, “it never occurred to him when he opened an ice cream parlor that such an establishment might attract children.” For another, he’s famous for creating flavors such as Hibiscus Beet, Salt & Pepper, Government Cheese, and Jesus Juice (made from red wine and Coke).

As the pastry chef at Coi, recently short-listed by Thomas Keller, the acknowledged master of American cooking, as one of the world’s best restaurants, Godby served a chocolate tart with smoked yogurt that, says Coi’s head chef, Daniel Patterson, made some diners so upset they wanted “to firebomb the place.”

The weirdness extends to the shop’s name:

With Humphry Slocombe, Godby continued pressing food buttons, beginning with the name, which is aggressively obtuse. (Mr. Humphries and Mrs. Slocombe were characters on the bawdy old British sitcom “Are You Being Served?” Godby insists that if Alice Waters could name her Berkeley restaurant Chez Panisse, after a highbrow French film, he could name his ice cream store after a lowbrow British farce.)

Humphry Slocombe offers 10 to 12 flavors a day from a list that includes:

Secret Breakfast (made with toasted cornflakes and Jim Beam)

Posted at 07:00 AM in Food and Drink, How They Got That Name, Naming, Restaurants | Permalink

The moment of truth for me was when Weil wrote that her kids had a few licks of Salted Licorice and dropped them on the sidewalk.

Q. Pheevr: Yes, I wondered about that myself.

Obtuse is OK. "Difficult to understand" is one of the dictionary definitions.