Word of the Week: Vuvuzela 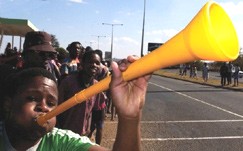 Vuvuzela: A cheap plastic trumpet responsible for the amateur soundtrack of the 2010 Fifa World Cup, currently under way in South Africa. The vuvuzela makes “a high-pitched blasting sound, much like a big air horn on trucks,” according to Boogieblast, a South African manufacturer of vuvuzelas.

The origins of the vuvuzela and the etymology of the word are both uncertain. According to SouthAfrica.info, a tourism site, at least one person—Cape Town music educator Pedro Espi-Sanchis—attests to having been introduced to the vuvuzela about 30 years ago. The instrument became popular at soccer matches in the late 1990s. On May 15, 2004, the day it was announced that South Africa would host the 2010 World Cup, some 20,000 vuvuzelas were sold by street vendors; about 650,000 vuvuzelas have been sold in all between May 2004 and the beginning of the games.

SouthAfrica.info says the vuvuzela is a descendant of the kudu horn (a kudu is an African antelope) blown to summon villagers to meetings. Boogieblast tells a different story:

The vuvuzela was introduced to South Africa as a toy for kids to blow, and hardly got off the ground. Selling the vuvuzela proved almost impossible, until the full potential was realized by the local soccer supporters.

The first prototype was from America [!] and changed somewhat for more comfortable blowing and effectiveness. We have researched the history of the Vuvuzela, and follows a trail back to a women's Chinese basketball team, AMAZING...

The word vuvuzela may be onomatopoetic, from “making a vuvu sound.” On the other hand, here’s SouthAfrica.info on the etymology:

Some say it comes from the isiZulu for - wait for it - “making noise”. Others say it's from township slang related to the word “shower”, because it “showers people with music” - or, more prosaically, looks a little like a shower head.

There are many claims to what the word really means, but more generally it means to pump up ones [sic] performance in a truly South African manner.

That “truly South African manner” is not universally popular among soccer spectators. The Wikipedia entry for vuvuzela includes this passage, amply documented in footnotes:

They have been associated with permanent noise-induced hearing loss, cited as a possible safety risk when spectators cannot hear evacuation announcements, and potentially spread colds and flu viruses on a greater scale than coughing or shouting. Commentators have described the sound as “annoying” and compared it with “a stampede of noisy elephants,” “a deafening swarm of locusts,” “a goat on the way to slaughter” and “a giant hive full of very angry bees.”

And the UK Times reported yesterday:

The racket is driving players, broadcasters and visiting supporters to distraction — so much so that the South Africa World Cup Organising Committee has warned that the trumpets might have to be banned. Fifa, football’s international governing body, issued an edict two weeks ago that the vuvuzelas must not be played during national anthems or stadium announcements.

But Danny Jordaan, chief executive of the organising committee — and the most powerful man in South African football — went farther yesterday, as he wearily admitted that he had had enough of the infernal noise that makes the stadiums resonate like gigantic beehives.

As Boogieblast puts it: “You only hate them if you don’t have one.”

In case you haven’t been following the World Cup, here’s an introduction to the vuvuzela:

Posted at 06:36 AM in Etymology, Music, Sports, Word of the Week | Permalink

Debuting on Twitter just this afternoon, @thevuvuzelahorn picked up more than a thousand followers in its first seven hours. Be sure to go to the bottom and read the tweets from the beginning for the full effect.

I wonder how many of those 650,000 bloody useless noise-makers will end up rotating round the Pacific gyre. Just what the world needs; more plastic tat.

Thanks! Great word and timely post. It's helpful to learn all the points of view. Will the vuvuzela be banned?

A friend sent me a link to this article, which has a headline that sums things up rather neatly. http://bit.ly/38gpQV However, my African friends (and not just South Africans) are ticked off about all the criticism. To them, it's seems to be a symbol of African pride.

interesting but i would like to know the sound level produced by someone that can properly play the thing. and would banning them lead to a scare to symphony goers etc. we would have to start putting mics in trumbones, tubas, saxes etc. but some instruments dont sound right unless they are given the maximum air intake. no more boston pops on the fourth etc. or lets just put them in a bubble. i for one get sick being around smokers but i use to smoke so like most things in life its a catch 22. i would just try and be sensible. dont blow them during someone elses anthom and maybee toward the ground like emptying your spit valve. might actually get a better sound that way. if you are good at it try to not blow out your own ear drums from the pressure you are producing. sorry about my spelling.

try to all go to the left or right at once, maybee you can alter the flight of the ball at a crucial time in the match. have fun and practice alot.