« Welcome to the Wayback | Main | On Visual Thesaurus: More Ranting About Lay Flat »

Word of the Week: Chesty

Chesty: Boastful, proud, self-assertive; having one’s chest thrust out as a sign of self-importance. The Oxford English Dictionary identifies this usage U.S. slang; the Random House Dictionary of American Slang cites 1899 as the year the word first appeared in print, in George Ade’s Fables in Slang and A.H. Lewis’s Sandburrs.

I confess that this definition of chesty was unknown to me until quite recently. (Is it a regionalism, perhaps? Neither of my lexicographical sources says so.) Previously, I’d associated chesty with this lady and others of her ilk: 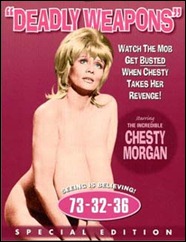 According to Jew or Not Jew, “the incredible” Chesty Morgan was born in Poland in 1937 and spent her early years as Liliana Wilczkowska. (Yes, she is Jewish.) After the German invasion, she somehow escaped to Palestine, where she met and married an American who brought her to New York City. She eventually became an exotic dancer and film actress; she even had a small part in Federico Fellini’s Casanova, but her scenes ended up on the cutting-room floor. Jew or Not Jew says she retired in 1991 and moved to Florida, “like all good Jews.”

But wait—it turns out there are at least two other accepted definitions of chesty.

One is musical: “pronounced thickness or heaviness from reproduced male voice, due to excessive energy in the upper bass or lower midrange.” (Source: Stereophile.)

The other is tea-tasting jargon: “a taint caused by unseasoned tea chest panels.” (Source: The Tea Man’s Tea Talk.)

And who, you are wondering, is the gentleman at the top of the post? That’s General Lewis Burwell “Chesty” Puller (1898-1971), the most decorated U.S. Marine in history. Puller took part in some of the bloodiest battles of World War II and the Korean War, and received his nickname because of his perfect posture and barrel-shaped chest. His approach to life and combat have earned him posthumous recognition in the online Badass of the Week gallery.* Among the quotations attributed to him are “All right, they're on our left, they're on our right, they're in front of us, they're behind us ... they can't get away this time” and “Take me to the brig. I want to see the real Marines.” (Source: Wikipedia.) According to several online sources, Marines at the Parris Island boot camp still end each day by saying, “Good night, Chesty Puller, wherever you are!”

* Obligatory warning: Badass of the Week employs prolific profanity and is thoroughly irresistible.

Posted at 06:43 AM in Nicknames, Slang, Word of the Week | Permalink

How funny! My husband was watching a documentary about Chesty Puller on the Military Channel over the weekend. Every time I passed through the livingroom, I heard his name and was struck by its likelihood of misinterpretation.

For me, the word "chesty" will always be associated with that Simpsons episode when Homer suggested that Marge could change her name to Busty St. Clair, Hootie McBoobity, or Chesty LaRue.