For most of the English-speaking world, wicked is an adjective that means evil. In the Boston area, however, wicked has long been used as an adverbial intensifier meaning very, e.g., wicked pissah. (The Bay Area equivalent, of much more recent vintage, is hella.)

But recently I saw two ads that made me realize wicked (adv.) had broken free of its regional associations.

First I noticed the slogan in this TV spot for the Mazda3: Wicked-Fun. Wallet-Smart.


Then, not two weeks later, I saw this AT&T ad in the New York Times. 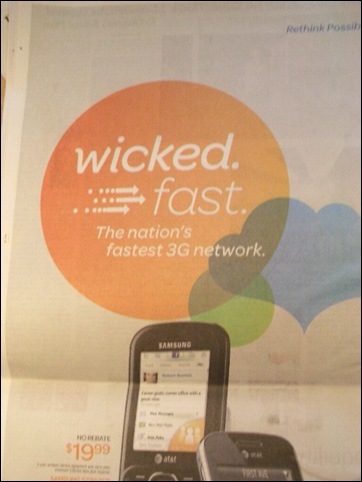 It’s not only the adverbial use of wicked in both ads that caught my attention: the punctuation is distinctive, too. In the Mazda ad, “wicked fun” and “wallet smart” take gratuitous hyphens; in the AT&T ad, each word is its own brief sentence.

I’m a native Californian who has never lived in any other state, and wicked (adv.) was completely unknown to me until I was well into adulthood. I may have come across it in a passage of dialogue in a novel or heard it in a movie; I remember how exotic it seemed. I’ve always associated it with the Boston dialect, but apparently over the last several years its use has spread almost nationwide (and beyond, perhaps?).

Here, for example, is an excerpt of a July 2006 New York Times article (“ ‘Wicked Fast’ Electric Car Set to Roll”) about the introduction of the Tesla Roadster, an electric car conceived and built in California:

It goes from zero to 60 miles per hour in four seconds, "wicked fast," said the company chairman, Martin Eberhard.

And here’s a 2005 article in Bostonist (“Old Navy Busts a Wicked Pissah Move”) that asks whether the lyrics in an Old Navy TV ad “include a subtle, Boston-friendly bit of vocabulary”:

[W]e haven't managed to write down all the lyrics, but we're pretty sure that at the end it says, "flow with the tunic and look wicked cute." Could it really be that Old Navy had MC Lyte come back into the studio to record a different version of the ad for local markets? (If so, is there a "hella cute" version for the Bay Area?) Or did Old Navy use a Mass-specific adverb in all the ads just to bolster business at the 30 stores in our state?

(A commenter confirms it: “The closed-captioning claims that they are singing ‘wicked cute’.”)

Steve Silberman, a journalist whom I follow on Twitter, suggested to me that the use of  wicked (adv.) has spread via the music-festival circuit. I have no way of corroborating his theory, so I’ll ask my readers: If you live outside of Boston, when did you first notice wicked as an adverb?

UPDATE 2: Thanks for all the comments! To clarify: I’m looking for examples of wicked as an adverb (wicked fast, wicked hot, etc.), not wicked as an adjective meaning "cool" (or anything else).

Posted at 10:35 AM in Advertising, Cars and Motorcycles, Punctuation, Slang, Slogans and Taglines | Permalink

In Canada (at least everywhere I've lived - BC, Alberta, Québec), 'wicked' is usually used to mean awesome, good, or cool. "That was a wicked show!" None of this 'very' stuff. Interesting to see how these things spread. Does it have more to do with the locations of the marketing firms that any of these companies are using than the companies themselves?

Des: No, the location of the ad agency isn't a factor. To the best of my knowledge, Mazda's agency is Doner, in the Detroit area, and AT&T's is BBDO Atlanta.

And it probably has very little to do with the advertiser's internal culture. Copywriters look for brandable words they can appropriate from the culture at large, especially youth culture. That's where the music festivals would play a role.

I grew up in Montreal and lived there until the early 90s. Like Des, I heard and used wicked as a positive intensifier, either with a noun or as a standalone exclamation. I haven't heard it used that way since I moved to Colorado.

I remember first hearing it in "Good Will Hunting" circa 1997.

I think the first time I heard "wicked" used to mean "cool" was in the first Harry Potter movie. The character ,Ron Weasley, was quite fond of it. I took it to be teenage slang that meant something fashionable in a provacative way. That's one bad car.(good) Whoa! That's a bad ass hat! (very fashionable)

I think 'wicked' in the 'very' sense was used in a Harry Potter movie, but not in the way a British person would use it. [Something about the Firebolt, possibly?] However, in the first movie when Harry shows Ron his scar, Ron says 'wicked' in the awesome/cool sense of the word. But in Britain 'wicked' has, for at least fifteen years, meant awesome/cool/amazing.

Okay, in addition to my previous comment, it was actually Oliver Wood in the first Harry Potter movie who says 'wicked fast' as regards the snitch. This is not a British turn of phrase, however. Even in Scotland, where they say things really weirdly.

Here in the UK, I'm quite sure I've heard wicked used in this way, as in "wicked cool", even though both of these words have almost the same meaning as standalone expressions. Where I live, in the North of England, however, you're more likely to here "well" doing exactly the same job as your "wicked", e.g. "That test was well hard."

I grew up in western Massachusetts and even though I'm only 100 miles from Boston, the accent and speech patterns are quite different. (I've been told I don't say "car" the way I'm apparently supposed to, but nobody I know from this area drops the "r.")

Still, I've been saying "wicked" all my life (and I'm 42). In fact, when I first saw that Mazda commercial, I felt a little stab of local pride.

One thing I find among folks my age is that we almost apologize when a "wicked" slips out. Friends from outside New England get a kick out of it!

I'm from Texas and remember hearing it in movies and tv shows without thinking it was weird or exotic, probably because it is so close to 'bad' or 'sick' meaning 'good.' I moved to NYC in 2004, so it's at least that old for me.

I grew up in Baltimore County, MD, just south of Baltimore. In the mid 60's, kids were using 'wicked', usually as an adjective but sometimes just as a response.
"Look at that!" "Wicked!"

A *Southern* California native here, who moved up and down the coast, and I can remember Hella being a marker for someone north of the Central Valley as far back as the early 80's.

I'm pretty sure it started at least a decade earlier than that though.

That was one marker of the Nor Cal dialect, as well as describing freeways without using determiners: "Take 4 freeway to 12, then go a while and go east on 7." So Call would have "the" before each.

The last example could be a marker for So Cal though. I never really listened for it outside of CA.

For Bob and others curious about California's north-south divide on [the] + [freeway number], here's an interesting post: http://www.languagehat.com/archives/003203.php