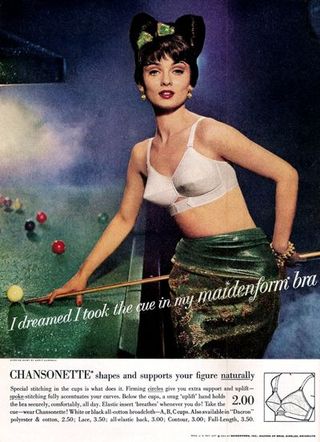 I'm assuming this subject will be of more direct interest to my female readers, but I hope the gentlemen will be amused (titillated?) by the photo and will stay for the marketing story.

Women’s clothing sizes are notoriously inconsistent and irrational—they vary from brand to brand, country to country, and year to year—but brassiere sizing is subject to a particularly baroque illogic, at least in the United States. That is, it seemed like illogic until I learned, just recently, how it came to be.

As I’m sure you’ve noticed, bras are sized in two dimensions: band circumference and cup depth (or volume). The band should fit snugly directly under the breasts, which is where the first measurement is taken. But here’s where the weirdness comes in: That number—let’s say it’s 32.5 inches—is not your band size. No, your band size is that number plus an additional 4 or 5 inches—in other words, 36 or 38. And your cup size is the difference in inches between your underbust measurement and your actual bust measurement.

So why the addition exercise? Why can’t we just buy a band size to match our actual underbust measurement? (This is, in fact, the way it works in Europe: If you’re 70 centimeters under your bust,  you’ll wear a size-70 bra.)

I happened upon the answer while browsing a the website of a lingerie retailer called HerRoom.* The site includes an extensive bra-fitting section—because bra fitting, as we all know, requires years of advanced study—and one of its features is a six-and-a-half-minute video called “How to Measure and Fit a Bra,” narrated by HerRoom’s founder and president, Tomima Edmark.** It's full of interesting information: Did you know, for example, that the tape-fitting system was devised by bra manufacturers in the 1930s, and was never intended to be used by women larger than 38D? Well, now you do.

But the most fascinating revelation for me was about those mysterious extra inches. Here’s Ms. Edmark:

Now, why do we add these inches to our measurement to find our band size? Well, it’s actually a fun story about early marketing. Just after WWII when this system was created, the ideal hourglass figure of the day measured 36,24,36. Women wanted to think their measurements were close to this ideal. The manufacturers needed the under bust measurement to make the bra fit correctly since the actual bust measurement of say 36 wasn’t helpful. Thus they hatched the idea of adding the additional inches to make a woman’s bra size sound more desirable. A 36B certainly sounded more desirable than a 31B. So, this is why the inches are added, and we continue with it still today.

“A fun story ”? More like “those dumb dames will believe anything we tell them.” It was the original vanity sizing, and women fell for it, even though it entailed a pointless extra step in an already tedious and frustrating measurement process. (“Round to the closest whole inch, either up or down. For example, if your measurement is 29 3/8", round to 29". If your measurement is 29 1/2" or more, round to 30".” Would men put up with this? I think not.)

Curiously, bra cup sizing developed (so to speak) independently from the band-measurement chicanery. Warners, a still-extant bra manufacturer, created the A-B-C-D cup system for the U.S. market in 1935. According to the fashion-history website Fashion-Era, it wasn't until “well into the 1950s ” that Britain adopted the U.S. standard; U.K. corset manufacturers used “coy terms like junior and medium.” But confusion still reigns: for larger cup sizes, U.S. manufacturers pile on the Ds (DD, DDD, DDDD), while their  British and European counterparts more logically proceed to E, F, and G.

* It's an excellent website, and I’m sure it’s a wonderful company, but I still maintain that “HerRoom” sounds like phlegmy throat clearing.

** Before she founded HerRoom, Tomima Edmark made a fortune as the inventor of “the wildly successful Topsy Tail,” a hair accessory. Her unusual first name, she tells us, “is a venerable family name from the Orkney Islands off the northern tip of Scotland” that has been passed down through her mother’s family since at least the 18th century. It’s pronounced “like ‘Jemima,’ but with a ‘T’.”

Posted at 11:57 AM in Fashion, Marketing, Retail, Underwear | Permalink

OMG--this brings me back when I had my first bra fitting at JC Penney, and they didn't carry a small enough size...suffice to say I was below a 'junior junior'...horrors!

Thanks for taking me back Fritinancy!

Sounds more like they were catering to those dumb guys' standards of physical attractiveness than "those dumb dames".

Fascinating stuff! I've recently switched bra brands, and had to navigate the difference between US and European cup sizing. I have to say the Euro version makes a bit more sense than continuing to add endless D's.

When I was in Paris for the summer as a student (waaaay before Victoria's Secret) my roommate and I decided to get ourselves those sexy bras (blue lace, in my case) not yet marketed to Nice Girls in small Midwestern towns. We pointed and mumbled, and the saleswoman came out from behind the counter, cupped our clothed boobs in her hands, and handed over the goods. (Yes, they fit. Those French -- amazing.)

The topic reminds me of another pet peeve: The bogus statistic that "85 percent [or whatever] of women are wearing the wrong bra size." Um, surely that means -- at best -- that x percent of WOMEN WHO ASK FOR FITTINGS are wearing the wrong size ... or that the size in the new brand doesn't match that of the old. But more likely, it's just a marketing fiction.

Re guesstimating bra size: I once had a friend who grew up in Central America, where her father had a business manufacturing Maidenform bras. She said that her father would bring bras as hostess gifts, and that they always fit. (Of course, I'm not sure how he or they verified that....)

As a guy, I of course know of any of this only by hearsay. But women of my acquaintance have always maintained that to get the proper size, a lady should visit that venerable Seattle department store, The Bon aka The Bon Marche, latterly (alas) just Macy's. More than one young lady I know was introduced to the mysteries of bra sizing by the unflappable, all-business veterans who staff the Foundations department at The Bon.

As another commenter notes, I also have heard that many ladies are not sized properly. Only as an observation (haha), I'll suggest that the error here is that some women believe that they wear a band size that is in fact smaller than their own actual circumference. (Which, frankly, can look sort of painful.)

Mike: The Town Shop in Manhattan was another such temple of mammary mysteries. When its owner died in 2003, the New York Times ran a wonderful obituary whose lede read:

"Selma Koch, a Manhattan store owner who earned a national reputation by helping women find the right bra size, mostly through a discerning glance and never with a tape measure, died Thursday at Mount Sinai Medical Center. She was 95 and a 34B."