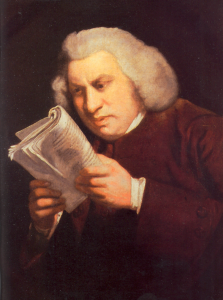 The big news this month for us word folk has been the launch of The Economist’s language blog, “Johnson.” (That’s Johnson as in Samuel, the 18th-century lexicographer*, so stop the snickering, you dirty-minded American.) I immediately added Johnson to my RSS feed and have not been disappointed. A few highlights: The meaning of President Obama’s use of “ass” (skip the comments if you prefer to hold your fellow humans in high regard); words you can’t use in the New York Times (à propos the previous item, tuchus is on that list); and the wild pigs and cucumber troops of German politics.

Another excellent language blog, new to me: About English Idioms. Ever wonder where we get the expressions “the cat’s pajamas,” “takes the cake,” and “Potemkin Village”? Find answers here.

I recently heard behavioral economist Dan Ariely speak about the research behind his books Predictably Irrational and The Upside of Irrationality, so I was primed to discover You Are Not So Smart, “a blog devoted to self-delusion and irrational thinking.” Do you think it takes years of study and experience to appreciate wine? That makeup “is just a cultural norm”? That “music with mass appeal rises to the top of the charts”? You are not so smart.

The ancient Greeks would have understood Homer Simpson when he said, “Fame was like a drug, but what was even more like a drug were the drugs.” That’s because Homer was employing the rhetorical device of metanoia, the self-correcting figure of speech. Figure of Speech, the blog that “rips the innards out of things people say and reveals the rhetorical tricks and pratfalls,” discloses the rhetoric behind a comprehensive list of Homerisms (and also Lisa-isms, Moe-isms, and Grandpa-isms).

Finally, a couple of links for the beginning of hurricane season: A list of all the named hurricanes for 2010 through 2013 (via NameFlash) and a Wired article explaining the science and politics behind the naming of hurricanes (via Anthony Shore).

Image of Samuel Johnson from Scholium.

Thanks very much for mentioning About English Idioms!

I'm enjoying the Simpsons-isms, too! Amazing what those yellow characters have contributed to the study of language. :-)