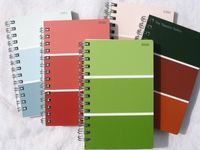 I've been going around and around with color names this week.

I started with this online survey on the XKCD blog, which attempted to determine the connections between sex and color naming. (Results are no longer being compiled, but you can still take the survey to see how it worked. Sorry: survey is no longer online.)

Then XKCD blogger Randall Monroe summarized the survey results here. Among the findings: "If you ask people to name colors long enough, they go totally crazy" and "Nobody can spell 'fuchsia.'" Read the entire post for proof of the former (one example: a shade of deep blue-violet that someone thought should be called "velociraptor cloaca"). And read as many of the 400-plus comments as you can, because they're hilarious and/or illuminating. If you're interested in the technical aspects of color classification, check out Randall's many links; also see his follow-up post about gender classification.

Next, Mark Liberman at Language Log commented on the XKCD experiment, and his commenters weighed in with even more humor and erudition. I hadn't known, for example, that the reason many men are familiar with "teal" and "Lake Placid blue" as color names is because they were used by the Fender guitar company. (Read about Fender colors here.) And Fender color names were inspired in turn by U.S. automobile colors, which took a turn toward the psychedelic (or just downright wacky) around 1970: Hulla Blue, Freudian Gilt, Counter Revolutionary Red, and Good Clean Fawn were all actual color names used by the Big Three automakers.

In terms of sheer quantity, there is no question that the main offender is OPI. The primary trick in their arsenal is replacing part of one word with a random similar-sounding word. Not exactly Algonquin Round Table-worthy -- I wish I could hire a linguist to go over there and explain to them what a pun is! OPI is also a great source of bad nail polish names because they are continually releasing collections themed to particular countries. The results make me think that no member of OPI staff has ever been overseas -- most of their "exotic" names are just stereotypes, some bordering on racist.

To which I would add: Fuggen Ugly by Man Glaze.

Read my other posts on color names.

Posted at 09:11 AM in Beauty, Cars and Motorcycles, Colors, Culture, Naming | Permalink

I can immerse myself in your links. My favourite was when my sister, a copywriter for a famous dept store, wanted to call a colour Menstrual Mauve. She was overruled but she and a friend slipped in Chicklit.

When my father was a Kaiser-Frazer car dealer in the fifties, the company invented a color called "Caribbean Coral." The color was very popular, but most people spent their time debating the proper pronunciation of the word "Caribbean." Emphasis on the second or third syllable?

I really like the names that Deborah Lippman gives her nail polish line (lippmanncollection.com). She's a singer, so she often uses titles of great songs, like "Night and Day" or "Call Me Irresponsible." She has great color descriptions, too -- "vivacious violet," "pink melon melange," "mood ring blue/green (shimmer)."

While researching a company I'm trying to land as a client, I found this company's great list of colors for their cars:

Make mine a Plum Lucky!

Go to autocolorlibrary.com and look up Dodge and Plymouth's 1970 colors for some neat stuff.