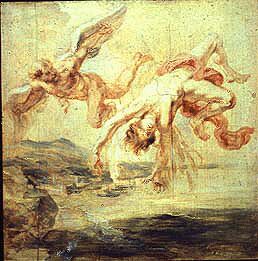 You may have read about the Japanese "space yacht" that will be launched later this month; it's a large sail that will be propelled exclusively by solar energy. Its name? Ikaros, an acronym for Interplanetary Kite-craft Accelerated by Radiation of the Sun. Oh, and also an allusion to another ambitious aviator, Icarus (or Ikaros). In the ancient Greek story, Icarus donned wings of wax, attempted to fly, and plunged to his death when the sun's heat melted the wax. It's meant to be a lesson in the consequences of hubris.

You'd think that "Ikaros" would be an inauspicious name for a spacecraft.* (Writing for the naming blog CatchThis, Aaron Hall called Ikaros "embarrassing and a huge naming mistake.") But Yuichi Tsuda, space systems expert at the Japan Aerospace Exploration Agency, apparently doesn't see it that way. While acknowledging the connection with the doomed flyboy, Tsuba Tsuda assured journalists that "this Ikaros will not fly into the sun."

It's tempting to attribute the misnomer to cultural differences. But "Ikaros" is just one example of imprudent classical borrowings. Here are a few others:

Midas. There's Midas Muffler, of course (which owns midas.com), and more than 300 additional Midas trademarks in the USPTO database, including marks for a chicken sauce, a window film, and a "wealth advisor." King Midas, you may recall, was given the power to turn anything he touched into gold. So far, so good. But when his food and drink turned to inedible gold, he cursed the gift. In some tellings, Midas even transformed his daughter into a golden statue and lost her forever. Inconsolable, he renounced his wealth and abandoned his palace. In a sub-plot, he ended up with donkey's ears. A sad tale all around, but the only part those 300-plus trademark owners seem to have heard is the "turned-to-gold" part.

Pandora. If you listen to music online, you probably know about Pandora.com, the free Internet radio service. But there are more than 30 additional registered trademarks that include "Pandora," including Pandora's Chest ("small pouch made for bras"), Pandora's Unforgettable Moments (jewelry), Pandorapedia (books and stationery products; the mark is registered to 20th Century Fox), and Pandora's Boxxx ("DVDs, adult novelty items, and marital aids"). I once wrote ads for a company called Pandora's Confections that made chocolate eggs that opened to reveal chocolate chicks. It always struck me as slightly bizarre, given that the original Pandora—the first woman, in Greek mythology—was responsible for releasing all of the world's diseases when she opened that fateful box (actually a jar). Sure, she snapped the lid back in time to keep Hope alive, but that's pretty meager comfort.

Cressida. In accounts of the Trojan Wars, including the Iliad, Cressida is a Trojan woman who pledges her love to Troilus, the eldest son of King Priam. Then she's sent to the Greeks in a hostage exchange, forgets about Troilus, and takes up with the Greek warrior Diomedes. Homer, Bocaccio, Chaucer, and Shakespeare called her "faithless Cressida," and used her as "a paragon of female inconstancy" (says Wikipedia). The Japanese auto maker Toyota, however, disregarded the sordid story when it chose "Cressida" as the name of a midsize luxury sedan it sold from 1977 to 1993. The Cressida model was a success, but "faithless" seems an apt epithet for Toyota this year, given the forced recall of thousands of vehicles because of problems with accelerator pedals, traction control, and other defects.

* Icarus is also the name of the international journal of solar system studies, published by Cornell University.

Image: "The Fall of Icarus," by Peter Paul Rubens, from here.

On second reference, you call Mr. Tsuda "Tsuba." Are you thinking of those Tsubo shoes, maybe?

Thanks, Jan! A case of transient dyslexia. Fixed now.