« How to Name Your Company? Not Like This. | Main | April Linkfest »

Word of the Week: Painted Dog 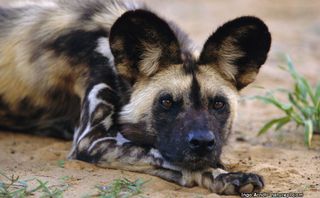 Painted dog: A friendlier name for the African wild dog, whose numbers have dwindled from hundreds of thousands to a few thousand, mostly in Zimbabwe, Botswana, Tanzania, and South Africa.

Wild dogs are not dogs, which split off from wolves only in the last 30,000 years. In contrast, wild dogs last shared a common ancestor with dogs or wolves about 6 million years ago. They are the size of German shepherds and look like dogs, but they don’t bark and have different teeth and toes. And although many have tried, they have not been domesticated.

The species' scientific name, Lycaon pictus, means "painted wolf." And that's the nomenclature Greg Rasmussen drew upon when he established Painted Dog Conservation in Zimbabwe's Hwange National Park in 2002. Rasmussen, who grew up partly in Zimbabwe, is known among canid experts as "Mr. Painted Dog," according to a 2007 Smithsonian magazine article about efforts to save the species.

Kristof writes that Rasmussen recognized the need to rename the animals "so that they sound exotic rather than feral":

Mr. Rasmussen is an exception, and his effort to rebrand the species as “painted dogs” caught on. The name works because the animals’ spotted coats suggest that they ran through an artist’s studio.

It's a story, writes Kristof, "that offers some useful lessons for do-gooders around the world, in clever marketing and 'branding,' and in giving local people a stake in conservation. For if it’s possible to rescue a despised species with a crummy name like 'wild dogs,' any cause can have legs."

A similar transformation occurred a couple of decades ago, when swamps were renamed wetlands and "the jungle" became "the rainforest."

Image of Lycaon pictus from BBC.

Posted at 07:13 AM in Animals, Branding, Naming, Science, Word of the Week | Permalink