« Electrons on Parade | Main | How to Name Your Company? Not Like This. »

Hello, fashionistas, and welcome to another installment of Oddly Named Shoes! Here, for your consternation, is a versatile and inoffensive peep-toe slingback pump that has inexplicably been named for the Greek god of the underworld. 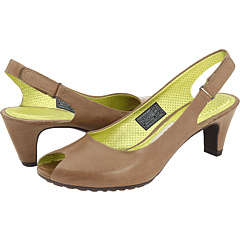 Erebus was the son of Chaos; his name means "deep darkness or shadow." In later mythology, Erebus was depicted as a material region: the lower half of Hades. For you non-classical types: Hell.

Here's what I'd have expected from a shoe called Erebus: 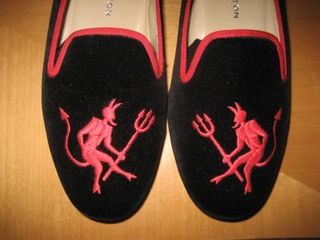 Image from Buffy W's blog. I recommend reading the post in which it appears:
it's a lovely and moving remembrance.

Next we have a sensible sandal from Wolky, a respected manufacturer of "comfort" footwear. For some reason this style is named for the mammalian order that includes rats, voles, and nutria. 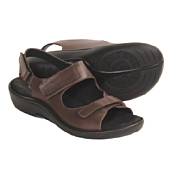 I can't see "Rodentia" without thinking of a Gary ("The Far Side") Larson cartoon that depicted two scientists in white coats locked in a lab (or was it a maze?). One scientist says to the other, in evident panic: "Trapped! Like Rodentia!"

For the record, here is the shoe I would have named Rodentia: 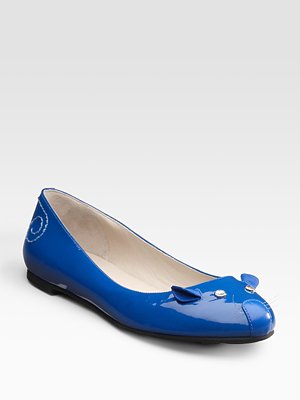 Read my previous posts about Oddly Named Shoes: the Stupa, the Weirda, the Shiva*, and the Nervous.

So I'm a man who doesn't really get into fashion and would rarely get excited by an article of clothing, but those shoes that look like mice are freaking adorable. These are shoes that adult women would wear? Not children's shoes?

Since I learned that "takotsubo" (a heart affliction) means "octopus trap" in Japanese, I've wondered why a brand of shoes would be "Tsubo." So now, finally, I've looked it up: The brand site says "Tsubo means 'pressure point' and captures our promise to relieve the pressure of life in the city." So now I know: The "tsubo" half of takotsubo is the narrow neck of the fisherman's trap, and also means "pressure point." I've definitely had shoes for which the name would be all too appropriate. They're not fondly remembered.

Drew: Marc Jacobs introduced the mouse shoe in 1998; in 2008 InStyle magazine named it the shoe of the decade: http://bit.ly/d7PNzN

Yes, it's for grown-up women, although there's a more recent version for little girls: http://bit.ly/dsWwmX

I learned my goth name is Heaven's Nemesis. And I think that would be a swell name for a peep-toe platform shoe with 5-inch heels.

Somewhere in blogland someone got bent out of shape that a German shoemaker named a shoe model Shiva. (Apparently forgetting that's a Hindu god, as well as the Jewish mourning tradition.)

Erebus was no doubt named b/c someone said "high heels are hell".

Duchesse: I was the one who wrote about Shiva--thanks for reminding me! (So many bad shoe names, so little memory.) I've amended the post to include the link.

I only own a few pair of very sensible useful walking shoes rather like the "Rodentia". I live and work in the country - what can I do with adorable patent leather mouse flats? They are CUTE.

For me it's unimaginable how a shoe that seems to say ,"Spring Day" or "Sunday Stroll" could be named after a god of the underworld. Even it's description, "peep-toe slingback pump" seems to suggest a small colorful bird that might sing one to sleep.

I could swear the Tsubo Erebus shoes were in my closet in the 1980s, when peep-toe slingbacks were the only shoes I wore. I had them in every imaginable color, including a pale and lifeless dusty rose.

Of course, this brings to mind the great story of the Reebok Incubus, a woman's running shoe. Incubus, hmm, Incubus, nice name, easy to pronounce and spell, has a little rhythm...what's it mean, again? Oh, something from mythology, I forget, have my assistant look that up before we print the boxes, okay?

Ooops. The Incubus made it all the way to the shelves before someone (ABC News claims credit)pointed out that an incubus was a male demon who ravished women in their sleep. Reebok recalled the shoe, and blamed the whole thing on employees who'd left the company.