« How the Anthora Got Its Name | Main | Word of the Week: Chicane »

The Oakland Museum of California (OMCA) reopens to the public this weekend after an eight-month, $58 million renovation that includes a new logo, a new website, an expansion of the galleries, and newly integrated collections. I attended the members' preview on April 29 and had a grand time. I'll leave the serious critiques of the new art and history galleries to more qualified observers—and won't say anything about the new restaurant, Blue Oak, which won't open for another month, except that it's sure to be an improvement over its school-cafeteria-style predecessor.

In the meantime, here's some fun stuff  from the preview party you probably won't read about elsewhere.

Just outside the Oak Street entrance, The Great Tortilla Conspiracy ("the world's most dangerous tortilla art collective") had set up a silkscreen press and was printing the OMCA logo and sundry other images on, yes, corn tortillas. The "ink" was chocolate or strawberry, so the tortillas were edible. But I'd have found a way to save this Magritte-meets-Hello Kitty mashup: 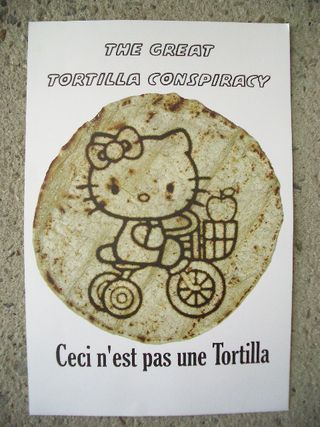 Inside the galleries, the signage has a temporary look. San Francisco Chronicle columnist Leah Garchik wrote that the informality is intentional, so that signs "can be altered readily, adding information or comment."

I don't think any additional comment is required here: Many of the exhibits challenge visitors' definitions of "art." The great Ambrose Bierce, who lived in California in the 1860s and 1870s, was unequivocal on the subject, as this sign attests: 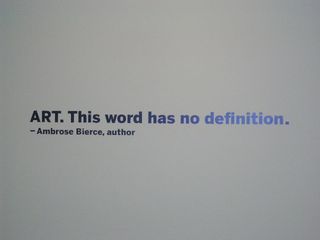 (I couldn't get the color balance right. It's actually black lettering on a bright yellow background.)

In the history gallery, you can turn yourself into an exhibit, as my neighbor Margitta did: 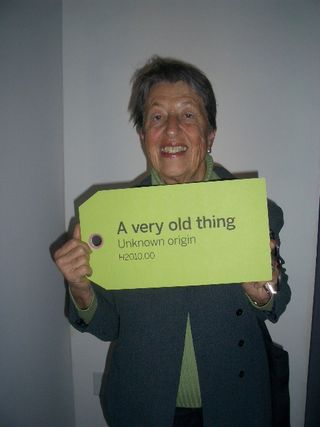 The gift shop has been moved and expanded, and its selection is even more eclectic than it was previously. I couldn't resist buying a bottle of Burn Baby Burn "revolutionary hot sauce," whose label bears the old Black Panther logo. 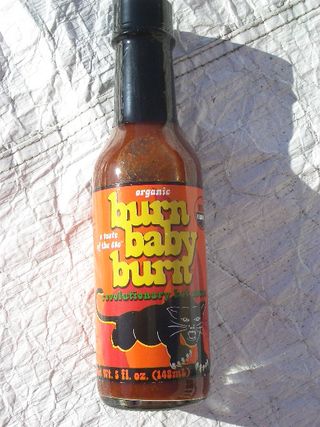 The Black Panther Party was founded in Oakland in 1966, three years before the Oakland Museum originally opened. The hot sauce, which calls itself "a taste of the '60s™," was created by Fredrika Newton, widow of party co-founder Huey P. Newton, and original Panther David Hilliard. Of course it's USDA certified organic. You had to ask?