Remember Motorola's Droid phone, with its crazy-making "bare-knuckled bucket of does"? (Buckets don't have knuckles! I'm pretty sure does don't either! And a bucket of does? Ewww.)

Well, Droid's advertising continues to wreak havoc on the English language. Last week, driving on northbound 880 between San Leandro and Oakland, I spotted a billboard with this message:

THE AMOUNT OF APPS IS ENDLESS

Nuh-uh. "App" (short for "application," you may recall) is a count noun, not a mass noun. It should be "the number of apps," although I'd probably rewrite it to say something like "The apps never end." 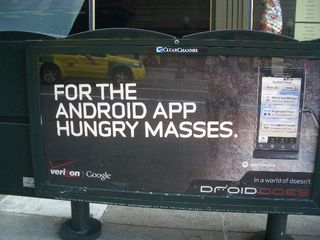 For the Android app? Hungry masses?

To reveal that copy's true intent ("For the masses who are hungry for Android apps"), you'd need to concatenate it with hyphens: For the Android-app-hungry masses. And even then you'd end up with confusing line breaks and a lot of questions. Such as: Why introduce a fourth brand name into an ad that already contains Droid, Google, and Verizon*? Why "masses," unless you're aiming for ironic hyperbole? (The Android operating system ranks a distant fourth among mobile-phone platforms, far behind RIM's BlackBerry and Apple's iPhone.)

Here's my big question: Does Droid employ human writers and editors? Or are its ads produced by syntax-challenged robots—perhaps the same ones featured in Droid ads and on the website?

Posted at 11:02 AM in Advertising, Grammar, Signs, They Said WHAT???, Writing | Permalink

I don't see why Apple hasn't fallen upon the simpler and more powerful "Infinite Applications." The double-meaning of "applications" (uses and software) packs a double-fisted (maybe even bare-knuckled?) wallop in only two words.

I should've been in advertising.

On second thought, maybe the ad in the picture is actually a warning of the Terminator-esque times to come:

For the Android App: Hungry Masses. (If you see a "How to Serve Humans" app pop up, start worrying.)

I'm convinced that this "short-hand" English which has emerged with time-sensitive social media instruments is problematic on a number of levels. It is faux-language at its best. Those who have been encouraged to adopt it are being cheated from the use of a medium (the English language) which allows for personal expression, unique humor, passionate commentary and colorful description. To the contrary, it provides a faux-language which is more a template than anything else. OMG, ths is so wrng 4 U. LOL.

This isn't an outgrowth of social media. Advertisers and, probably more so, newspaper headline writers have been screwing with us like this for ages.

Unless you're talking specifically about those LOL abbreviations 4 tweeps 2 condense thr thots. But OMG, that isn't even mentioned in this post.

I think it would actually be "For the Android app--hungry masses" where the dash is an n-dash (like with Pulitzer Prize--winning). Oh, dashes are hard to communicate in plain text. I couldn't even parse it, the way the sign is, though.

Yes, I am a copyeditor by profession. Why do you ask? :)