Word of the Week: Yarn Bombing 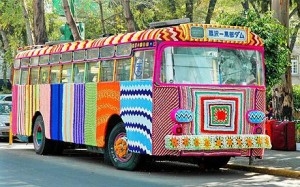 Yarn bombing: "The surreptitious or unauthorized placement of knitted objects on statues, posts, and other public structures." — Word Spy

There's a subversive group of knitters in Montrose, Texas, for example, calling themselves Knitta, that say they "yarn bomb" neighbourhoods with knitting graffiti — colourful knitted objects they leave in unexpected places — to help bring a warm, fuzzy feeling to their communities.

The Knitta group was started in 2005 by pseudonymous knitters AKrylik and PolyCotN; their first project was a doorknob cozy. Group members styled themeselves after rap artists and assumed names such as Knitorious N.I.T., SonOfAStitch, and P-Knitty. The practice spread throughout North America and the United Kingdom.

Some yarn bombers publish their work in blogs. KnittaPlease (motto: "We knit graffiti") is a tongue-in-cheek allusion to "nigga, please," street slang for "give me a break." Yarnbombing.com ("Improving the urban landscape one stitch at a time") cast off the cloak of anonymity when its authors, Mandy Moore and Leanne Prain, published a book.

The bomb in yarn bombing is an older slang term from the lexicon of spray-can graffiti. To bomb (or hit) is to spray many surfaces in an area. A bomb can also be a spectacular failure (chiefly U.S.) or a spectacular success (chiefly U.K., but appropriated in U.S. slang as "the bomb").

Yarn bomb is just one of many -bomb compounds invented in recent years. See, for example, photobomb (to hijack a photo by suddenly entering the frame; watch video of Oscar-nominated actress Gabourey Sidoube describing to TV host Jimmy Kimmel her photobombing of Jake Gyllenhaal); Google bomb (the practice of using anchor text to manipulate search engine results, often for malicious purposes); meat-bomb (a parachutist); and, in the world of product trademarks, Flowerbomb, a fragrance by Viktor & Rolf. See other bomb compounds and definitions at Double-Tongued Dictionary.

Posted at 07:24 AM in Art, Perfume, Slang, Trademark, Word of the Week, Yarn | Permalink

I'm heartened by the sheer daffiness of yarnbombing, to which you have introduced me. Thank you!