One more brand sighting from my Minneapolis trip: 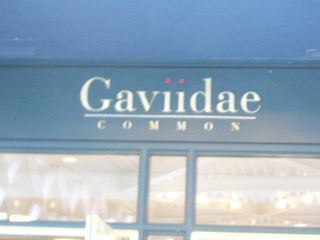 (Apologies once again for the blur.)

Gaviidae Common is a large downtown shopping mall and office complex anchored by Macy's and Neiman Marcus. When it opened in 1989, the Minneapolis Star-Tribune made note of its "off-putting Latin name"*; the St. Paul Pioneer Press said the name had "more vowels than an Italian sonnet." (The Pioneer Press also said the mall, designed by Cesar Pelli, "may be the finest building of the 1980s in the Twin Cities.")

Between shopping and fieldwork, I've been in a lot of shopping malls; most of them have bland names like Fashion Square or Pavilions or Westfield or The Grove. The biggest mall of all—also in Minnesota—has the most accessible name of all: Mall of America. Gaviidae, by comparison, is a very risky, very inaccessible name. It certainly caught me by surprise. I had to look up the word: It rhymes, roughly, with "have a day" and is the Latin name for the family of birds that includes loons (and only loons). The common loon is Minnesota's state bird.

Not only is Gaviidae unlikely to be familiar to the average non-birding shopper, it's an odd word to see in an English-speaking context, period. That -ae ending, for example: Unless you've studied Latin, how often have you seen it? (OK: "alumnae." Anything else?) And the double i in the middle of the word: very un-English. The mall actually capitalizes on this unfamiliarity by extracting the double-i as a brand-identity element.

What's especially interesting is that Gaviidae Common has largely avoided the obvious loon imagery. There's a large, beautiful wooden sculpture of a loon suspended from the mall's high ceiling, but otherwise no references I could detect, unless "Common" is meant to suggest "common loon" as well as "community space" (compare Boston Common).

On the other hand, this sign in the Minneapolis airport flaunts its loon-iness: 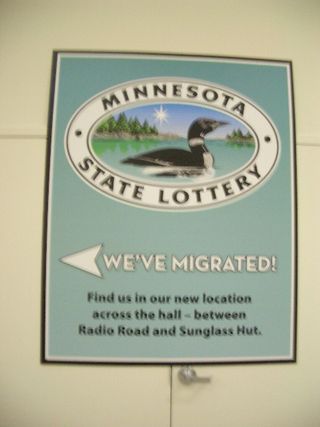 * I kept reading it as gravida, a medical term meaning "pregnant woman." I remember a friend's dismay when she was told, at age 36, that medical science considered her "an elderly primigravida."

Post title from On Golden Pond: "Come here, Norman. Hurry up. The loons! The loons! They're welcoming us back." The play and the 1981 film were set not in Minnesota but in New Hampshire.

Posted at 11:30 AM in Branding, In the Wild, Naming, Retail, Signs | Permalink

There are still a few AE plurals out there, e.g., antennae, minutiae, Obamae, etc.

I've lived in the Twin Cities almost my entire life (and have visited Gaviidae many times), but I never knew about the loon connection. I always figured Gaviidae was named after some old French or Norwegian guy, like everything else around here. Ya learn something new every day, you betcha!

Me, I thought Gaviscon, but I'm warped.

Hmmm, '-ae' ending.... The one that immediately comes to mind: sundae. I think I need to do something about my sweet tooth....

By the way, I'd never encountered the word Gaviidae before, but I'm not an ornithologist. I can barely tell a sparrow apart from a finch!

As a native Michigander I can say that all throughout the Northern Midwest there is a bewildering mix of place names,languages,spellings, some simply made up. As Michellegerner suggests "Gaviidae" might be able to survive there simply because many other names are a bit "odd" also.