On the Brand Trail: Minneapolis

I was in Minneapolis last week—my first-ever visit to that city—to speak at a trademark-law seminar about the Mysteries of Naming. (My thanks to Stephen Baird of Duets Blog for graciously hosting my trip.) Although my stay was short, I managed to take note of some interesting local brands.

This magnificent sign—often described as "iconic"—looms over Nicollet Island, just north of downtown Minneapolis. I walked over the Hennepin Bridge (built on the site of the first permanent span across the Mississippi River) to get a better view. 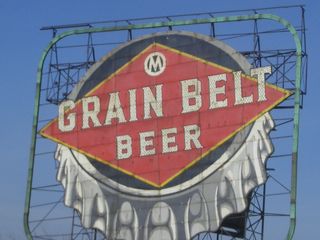 Grain Belt beer has been brewed in Minneapolis since 1893; the bottlecap logo was created in the 1930s, and this sign was erected around 1940. According to the Wikipedia entry, the letters of the sign once flashed in sequence. As far as I can tell, the brand is sold only in the Midwest.

"Minneapolis" and "Minnesota" lend themselves to brand puns. The menu at Fire Lake restaurant had a list of  "Minne Sodas" for kids and teetotalers. (The cocktail menu offered a Purple Rain cocktail named in honor of native son Prince.) In the Minneapolis airport I spotted Minnestalgia brand chokecherry syrup; Minnestalgia also sells jams, pancake mixes, and locally grown wild rice.

Steve Baird reminded me that Minneapolis is sometimes called MinneADpolis because of the many ad agencies and design shops there. Sure enough, there's a Minneadpolis website. Its tone may strike New Yorkers and Californians as a trifle too eager to please, but hey: that's Minnesota Nice for you! (Even the TSA employees at the airport seemed shockingly pleasant to this jaded traveler.)

Speaking of Minnesota Nice, I was curious about, but untempted by, the bottles of Minnesota Nice wine ("The closest you can get to Napa in Minnesota!") at an airport shop. On display were Hot Dish Red and Wobegon White; the website announces a new, um, flavor: You Betcha Blush.

And speaking of slogans, for the last couple of years the official Twin Cities slogan has been "More to Life." I wrote about the slogan in 2008, and last week I saw it all over the downtown area. To some people, "More to Life" may sound optimistic, especially in early March. To others it may evoke Michael Jackson. Me, I couldn't get this song from Gigi, about a very different city, out of my mind.

Posted at 12:43 PM in Advertising, Branding, Design, Food and Drink, In the Wild, Naming, Retail, Signs, Slogans and Taglines | Permalink

You know, I don't think I've ever met anyone mean from Minnesota.

Am always moved by the straightforwardness and availability of people, unbroken vistas and proximity to nature there. Glad you landed in "Mpls".

What? And you didn't call? Let me know next time you're in Minneapolis. I'll give you the "local brand tour," which would include such greats as the Bad Waitress Cafe, Electric Fetus, and Surly Beer.