Word of the Week: Telepalmter 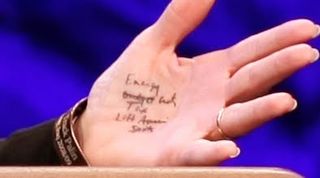 Telepalmter: Humorous reference to notes written on Sarah Palin's palm and referred to by Palin during her Feb. 6 keynote speech at the Tea Party convention in Nashville. The word was coined in imitation of teleprompter, a genericized trademark for an auto-cue device.

The words on Palin's palm appear to be "energy," "budget cuts" ("budget" is crossed out), "tax," and "Lift American spirits."

Palm notes are an ancient memory-jogging device familiar to anyone who has cheated on a school exam. The telepalmter coinage is an allusion to Palin's (and others') mockery of President Obama's use of a teleprompter during formal speeches.

Mr. Obama is not the only U.S. leader to have relied on auto-cues. 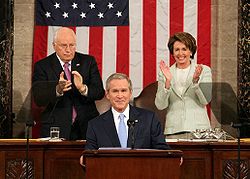 George W. Bush flanked by transparent teleprompter screens during his 2007 State of the Union address. 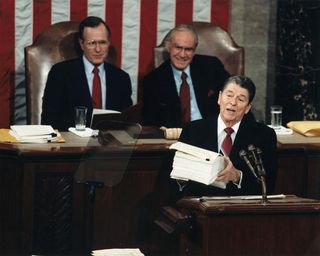 Ronald Reagan using a teleprompter during his 1988 State of the Union address.

Telepalmter began appearing on blogs and Twitter almost as soon as Palin finished her speech. Its first appearance may have been in a comment on a Daily Kos diary; it appears elsewhere as TelePalmTer and telepalmpter. Other waggish references have included "palm reader" and "Palin Palm Pilot." UPDATE: Or "Hillbilly Palm Pilot," as noted in The Times of London. (For an apolitical discussion of the persistence of "Palm Pilot," read my December 2009 post, "The Brand That Refused to Die.")

TelePrompTer, with internal capitals, was originally a trademark registered to the TelePrompTer company, which developed the technology in the 1950s. According to the USPTO database, the last owner of the mark was Westinghouse Broadcasting Co. Registration was canceled in 2003; there currently are no live trademark registrations for the name.

Thanks to Sherry Noik for bringing telepalmter to my attention.

Posted at 07:03 AM in Politics, Portmanteaus, Speeches, Trademark, Word of the Week | Permalink

Funny item from the Onion on Obama's over dependence on prompters:
http://www.theonion.com/content/video/obamas_home_teleprompter

Unfortunately, Obama has opened himself to parody and ridicule with his over use of prompters. Like the recent grade school visit complete with presidential seal and prompters : http://tinyurl.com/yhahvot

Nancy, this is so thoroughly written, chock full of allusions and crisp historical references! Before I saw your tweet, I had pulled together my "telepalmter" for the day which you may enjoy: http://ow.ly/167aP .
Thank you!
@carlainsf