It's been a good week for portmanteau sightings. I snapped the first two pics in my neighborhood: 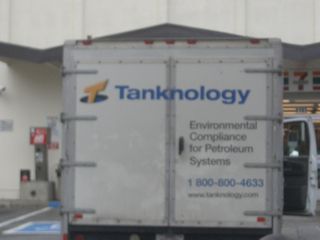 Apologies for the blur. The Tanknology truck—the company name is a portmanteau of tank and technology—was making a pit stop at a local service station. 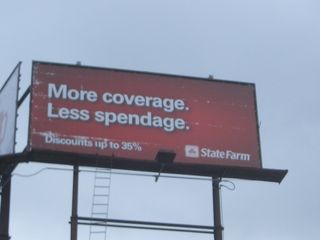 I spotted the State Farm Insurance billboard not far from my house. Spendage is coined, but, curiously enough, costage (cost, expense) was familiar to Chaucer in the 12th century.

I saw a different State Farm portmanteau ad on the side of a Muni bus in San Francisco: 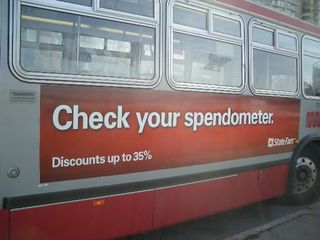 There was a Snacktrition (snack plus nutrition) display at the checkout at Marshall's in San Leandro: 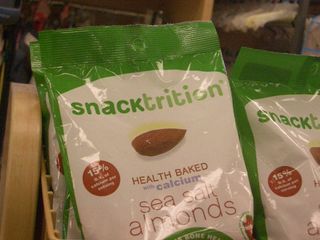 In other portmanteau news, word maven Mark Peters devotes a column to word blends, including one I hadn't heard of: pizzly (the offspring of a polar bear and a grizzly). I did, however, know about pizzled, a portmanteau of "puzzled" and "pissed off," and pizzle, which is something else altogether.

To blend, perhaps to croak: Linguist Arnold Zwicky on the giant portmantoad.

Here's how I knew portmanteaus would loom large this week: Monday's poem of the day on public radio's Poetry Almanac was "Portmanterrorism," by Nick Lantz. It starts like this:

Would it make a difference to say we suffered
from affluenza in those days? Could we blame
Reaganomics, advertainment, the turducken
and televangelism we swallowed by the sporkful,
all that brunch and Jazzercise, Frappuccinos
we guzzled on the Seatac tarmac, sexcellent
celebutantes we ogled with camcorders while
our imagineers simulcast the administrivia
of our alarmaggedon across the glocal village?

Read the rest, which includes one of my all-time favorite portmanteaus—anticipointment—and ends with a poignant twist.

Posted at 07:13 AM in Advertising, Branding, Naming, Portmanteaus, Slogans and Taglines | Permalink

Thanks, Nancy. I'd never seen "anticipointment" before, but it's now my new favorite word! Its meaning is so clear, and I've been dealing wordlessly with it for so long!

I was just going to say the same thing! Anticipointment should be a real word. Maybe those word-of-the-year people can all get together? They seem to have a lot of inflout.

'Pizzly' is not obvious -- surely a necessary attribute for a newly-coined portmanteau? -- and it's unnecessary.

Snacktrition makes me think of snacking followed by contrition, but then I was raised Catholic.

Hi Nancy, thanks for sharing this very well written article. These pictures are great, 'Tanknology' was my favorite. I have seen the same banners of State Farm Company in others cities as well.

Hi Nancy, thanks for posting my husband's poem. The listed the title wrong on the website at first. The poem is actually "Portmanterrorism" which makes more sense. We enjoyed all the Portmanteaus you found!

Thank you, Vicky. I've corrected the title. It's a wonderful poem and you're right--the title makes much more sense this way!