Valentine's Day is Sunday, and retailers everywhere are on puttin' on the glitz. Also the red, the pink, and the heart-shaped boxes of chocolate.

Everywhere, that is, except for the corner of 20th and Broadway, Uptown Oakland. 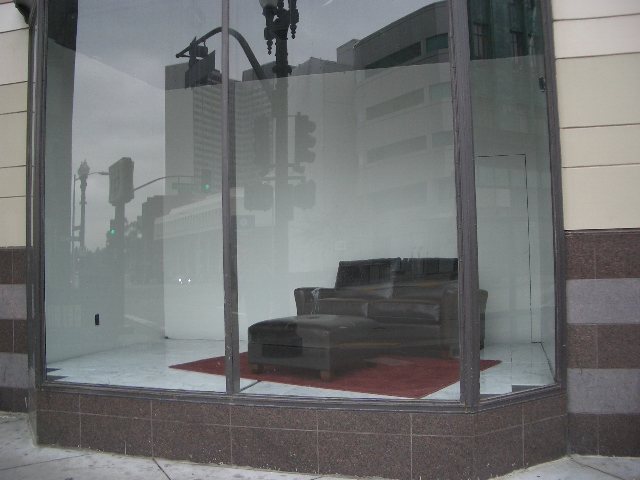 This is how the corner window of Sears, Roebuck— Oakland's only remaining department store—looked on February 10. If you're not familiar with Oakland, let me set the scene: This is as close as we get to Main Street. The busy 19th Street BART station is just outside of the photo frame. City Center and the federal buildings are a few blocks away.

And then . . . this: the saddest store window in town. A vacant leather loveseat (oh, the irony!) and ottoman on a limp rug that looks like a giant wine stain. It could be the stage set for a misanthropic, soul-curdling Neil LaBute play. The bachelor pad of a guy too depressed to create clutter. The office of the VP of human resources at Despair, Inc. The anti-Valentine.

Why so glum, Sears? Last June I gently mocked you for your surreal/zany/depressing Father's Day display, but that tableau— same corner window, by the way—was positively sumptuous compared to this one. Do you hate Oakland and wish you could be somewhere snazzier? Is the loveseat a metaphor for the hollow commercialization of Valentine's Day? A cynical allusion to love's labors lost?

Loveseat on a rug—
empty, like my shriveled heart.
Somewhere, Cupid weeps.

The last Valentine
Crumpled beneath the loveseat:
"Let's always be friends."

The dark, lonely part of me hopes that Sears will day-by-day build this up to a cynical view of love, loneliness, and Valentine's Day by the 14th. Each day, a pile of mail grows: circulars, bills, junk mail, but no personal correspondence, no valentines. A phone with an answering machine that always registers zero messages. CDs with songs of love lost -- Elvis Costello, Counting Crows, Pink Floyd's "The Wall," "Frank Sinatra Sings for the Lonely. It culminates on V-Day morning, when a suicidal mannequin hangs himself above his leather loveseat, now on sale inside.

But that's the dark, lonely side of me. The realist in me thinks that someone just didn't get to finish the display before it was time to go home.

How poignant. Poor Oakland... Hope our Mayor is listening. Are you there, Mayor Dellums? Hello???

I thought that the Father's Day window was a fluke, but this is an inspirational masterpiece. I'm starting to wonder about Mother's Day and Easter. Oh,and what a great hyku! I love the last line. I got kinda sniffy after the first reading.

i actually like it. they're being honest. nobody's buying much and if they do it's second hand or "needs" only.