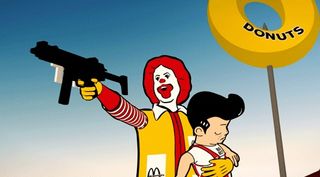 Over the weekend I finally did something I've wanted to do every year for many years: I saw all of the Oscar-nominated short films, animated and live-action. These movies are, on the whole, labors of love (or film-school degree candidacy) that don't get distribution deals; if you're not a voting member of the Academy of Motion Picture Arts and Sciences, you won't see them. Not, that is, unless you hop to it and make a date at a Landmark Theatres cinema near you, where the movies are being screened for a week at a time.

I liked a lot of what I saw, although, as others have noted, the films are pretty dark this year: Chernobyl, modern-day slavery, serial killers. (Even Wallace & Gromit fall prey to a homicidal scheme.) My top pick, though, is the startling and hilarious Logorama, from the French studio H5 (although the R-rated dialogue is in English). It's 16 minutes of high-speed action set in a phantasmagorical Los Angeles landscaped with corporate logos—2,500 of them, by one count. Part of the fun is to see how many you can recognize; another part is speculating about how many lawsuits the filmmakers will face for their blithe appropriation of intellectual property. The film caused a minor sensation when it was screened at Sundance last month, and it's been the talk of the ad blogs ever since. Here's what David Gianatasio said about it at AdFreak:

The concept is played for laughs (there are car chases and a hostage crisis, among other things), but it's no huge leap to envision such a world. We already walk around covered head to toe in designer logos, and phrases like "Turn left at the Citgo sign" and "It's two blocks down from Petco Park" increasingly help us find our way. It's just a matter of time before life-size animated avatars stroll down Main Street, humming jingles and chanting taglines.

I found the film online here, but it may not be there by the time you read this; it's been removed from some other sites because of copyright issues. (It may be available soon as a paid download from iTunes.) If you're in a cubicle, you might want to turn down the speakers (remember: R-rated language). The trailer is safe for work.

Posted at 07:00 AM in Branding, Film, Trademark | Permalink

Thanks for that great link! The image of Ronald McDonald standing in the shattered Pizza Hut window, laughing maniacally as he sprays the street with the Uzi (tm) will stay with me for a long, long time.

Given the French hatred for McDonald's, I'm not surprised Ronald was cast as the bad(dest) guy. I am surprised the Golden Arches folks haven't sued yet. Or have they?

Carroll: I haven't seen anything about lawsuits threatened or real. But there *has* been a lot of marveling that the filmmakers were able to get away with it.

I don't think there really will be lawsuits, Nancy.

Not even I think there will be.

As long as they don't make a second film, they're good.