« Words of the Year/Decade: Final Edition | Main | Ads of Yore »

Word of the Week: Octothorpe 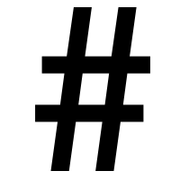 Octothorpe: The crosshatch symbol—shift-3 on a standard QWERTY keyboard— used to represent "number" and "pound" in the United States and for various other purposes around the globe. Also seen as octothorp, octathorp, octothorn, and octatherp.

The origin of octothorpe is murky and the stories surrounding it colorful. According to the extensive World Wide Words entry, the word first appeared in print in 1974, which would likely rule out a hypothetical etymology that links octothorpe to the surname of James Edward Oglethorpe, an 18th-century English philanthropist.

According to some theories, the "octo-" of octothorpe stands for the eight points of the symbol.

My favorite octothorpe origin story is the one that supposedly came out of Bell Labs. Here's how World Wide Words summarizes:

[I]n the early 1960s a Bell Labs engineer, Don Macpherson, went to instruct their first client, the Mayo Clinic, in the use of a new telephone system. He felt the need for a fresh and unambiguous name for the # symbol. He was apparently at that time active in a group that was trying to get the Olympic medals of the athlete Jim Thorpe returned from Sweden, so he decided to add thorpe to the end. (Jim Thorpe, a native American who has been described as the greatest athlete of the twentieth century, had won two medals at the 1912 Olympics in Sweden, but had been disqualified because he was found to have accepted money for playing baseball three years earlier, so making him a professional. His medals were finally returned in 1983.)

But another Bell Labs engineer, Douglas A. Kerr, recalled it differently in a paper published for the labs' 70th anniversary, in 2006. Kerr spells the word octatherp and says it was coined as a practical joke played on him by two colleagues. Among the salient points: the th diphthong digraph (see comment) was included expressly because it's hard to pronounce in many non-English languages.

The # symbol goes by many other names besides octothorpe/octatherp/etc.:

Hash mark (possibly from hatch, as in crosshatch). A hashtag on Twitter (e.g., #brandchat) identifies a topic, adds content, and is a live link.

Number sign (U.S. and Canada; also the name of the character in the ASCII standard).

Posted at 07:50 AM in Punctuation, Technology, Word of the Week | Permalink

If you're going to get into that, you'll need this relic of the early computer age.

The text of the poem follows. You'll note that it uses both the "hash" and "number" labels for "#"

The poem can only be appreciated by reading it aloud, to wit:

I very much enjoy your blog, but I had to wince when you called "th" a diphthong. You probably meant to say "digraph" – two letters that represent a single phoneme, in this case, a consonant and, specifically, a voiceless (as in "thin") or voiced (as in "then") dental fricative. A diphthong, on the other hand, is a vowel sound formed from merging two vowel sounds, e.g. the sounds represented by the "y" in "my" or the "a" in "skate" or the "ow" in "cow".

Rawley: Right you are, of course. I lifted "diphthong" from the source material without double-checking, even though I had a nagging sense it was incorrect. I've changed it in the post. Thank you!