Cast your eyes upward in the older part of any American city and you're likely to glimpse a relic of advertising history.  Take, for example, a sign I saw earlier this week on the side of a gingerbready Victorian in Old Oakland, near 8th and Washington: 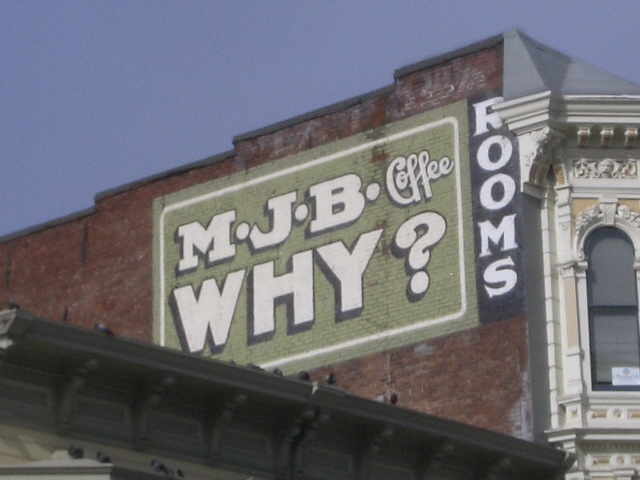 The paint may look fresh (probably thanks to a local preservation effort), but the sign is a relic of a curious ad campaign that made its debut exactly a century ago—a campaign I learned about in an interesting article by Susan Saperstein, "San Francisco Coffee Roasters."

MJB Coffee was founded in San Francisco in 1899 by Max Brandenstein, whose father had immigrated from Germany during the Gold Rush. Max originally named the company after himself; he changed it when his brothers Mannie, Eddie, and Charlie joined the company. Saperstein writes that the brothers' first coffee brand, called Climax, "was advertised with a woman reclining in bed, smiling and sipping a cup of coffee."

Their next campaign was also suggestive, but in a different way:

Mannie launched a marketing campaign in 1910 with the slogan “MJB Coffee Why?” It began with promotional fans given to people attending a boxing match in Reno, Nevada; later signs were painted all over San Francisco. Mannie’s daughter later revealed the meaning of “Why?”–Mannie said it had no meaning, he just wanted people asking about MJB.

MJB 's "ultramodern coffee parlor" at the 1915 Pan-Pacific International Expo in San Francisco made creative use of the "WHY?" slogan: 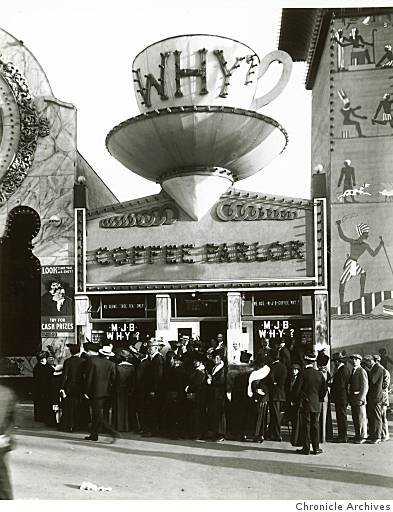 (Photo from the San Francisco Chronicle.)

Mannie, Charlie, and Eddie changed their surname to Bransten to avoid anti-German bias during World War I. "This angered Max," Saperstein writes, "but they all reunited after the war."

To see the effects of a hundred years of sun, rain, and fog on a painted ad, see this MJB sign of similar vintage across the bay.

Additional history from this Facebook post. Special thanks to Bay Area journalist and historian Frances Dinkelspiel for helping me make the Rena Bransten connection.

Thanks for posting this. I was the last brand manager on MJB at Nestle before we sold the business to Sara Lee.

The combined effect of strong category competition (P&G w. Folgers and Kraft w. Maxwell House) and the impact that Starbucks had on the whole category has not been kind to MJB. It's still hanging on in some of its historically strong markets but you have to be quite determined to find it on the shelves these days.

I always had a particular affinity for MJB because its initials are also my initials. In fact, when I was the brand manager on MJB, I ordered plenty of promotional items with the MJB logo! (I'm drinking out of a MJB coffee cup as I write.)

So, it was good to read about MJB when it was in its heyday and to see that there are still some signs of it around the Bay Area.

Thanks for the coffee history lesson! I love those old signs painted on brick buildings.

Thanks Nancy for such a great post. I, too, am a Bransten descendant. For a really great flavor of early San Francisco and MJB coffee, read "Under Mannie's Hat," by Ruth Bransten McDougall. Her father, Manfred, was Max Brandenstein's brother. She is also Rena Bransten's aunt.
The book opens with the SF earthquake in 1906 when Mannie rushes out of the house to check on MJB and his very proper wife yells after him not to forget his hat! It's a romp through the world of SF.

Delightful, Nancy. Reminds me of an early Gold Medal flour slogan: "Eventually" (or its longer version, "Eventually--Why Not Now?).

(as long as that sign was up, there was always a San Francisco band named 17 Reasons Why. None of them ever took off, so there was a new one every couple of years. But the sign's gone now, so that one will probably not come up again...)