« That Word | Main | Words of the Year/Decade: Final Edition » 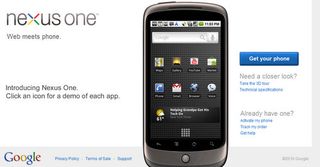 On Tuesday, Google introduced its Nexus One app phone, which runs on the Android open-source operating system and may or may not be the iPhone killer Google would like it to be. I'll let others debate the technical pros and cons, as well as Google's marketing strategy (selling directly through the web rather than through wireless carriers). I'm here to talk about the name.

Depending on your life experiences, you may have had one of these responses to "Nexus One":

3. "Swell. Another tired 'Nexus' trademark to add to the 200 or so already in the database."

I'm in the #3 camp. "Nexus" strikes my ear as an amateur name: bland, pretentious, past its prime, virtually generic, cluelessly geeky. Yes, it means "connection" (connexion to you Brits). Well, big whoop. A phone represents connection; it doesn't need to be named Connection.

(Memo to all companies choosing names: A strong name is suggestive, not descriptive. If you have the marketing budget to support it—and I'm guessing Google has a few bucks lying around—I'd even recommend you go for an arbitrary name: Apple for computers, Skiff for an e-reader, Anthropologie for a clothing store. Dare to be distinctive!)

On to "One." Are subsequent models going to be named Nexus Two, Three, and Four? Or is this an attempt to sound alpha, as in Air Force One? Attached to a corporate name, "One" sounds like the next big thing of 1993. Like Commerce One, one of several dot-doom companies in which I regret to say I owned stock. Or Cellular One, one of the earliest—circa 1977—mobile-connectivity providers. Neither of those names communicates "21st-century game-changer."

But enough about me and my take on Nexus One. What about that Blade Runner/Philip K. Dick contingent? What on earth are they talking about, and is it as cool as all that?

A summary for non-fanboys and -girls: Philip K. Dick (1928-1982) wrote high-class science-fiction that explored political and philosophical themes. Several of his stories have been made into movies (Minority Report, Total Recall, A Scanner Darkly); his novel Do Androids Dream of Electric Sheep? became the cult classic Blade  Runner (1982), starring Harrison Ford. Both the book and the movie center on a rogue group of androids called Nexus-6 replicants.

Aha! Android: check. Nexus: check. It's just the sort of cheeky geekery we might expect from Google.

The family says the use is a trademark violation, and sent Google a letter Wednesday demanding the company cease using the Nexus name and requesting the company turn over relevant documents within 10 days.

"Who, us?" replied Google, all googly-eyed innocence. "Pure coincidence!"

Bonus food for thought: This hypothetical Nexus One logo evolution has been flying around the web all week.

Actually we Brits normally spell it (outside religious circumstances) as connection, too.