Word of the Week: Uncanny Valley 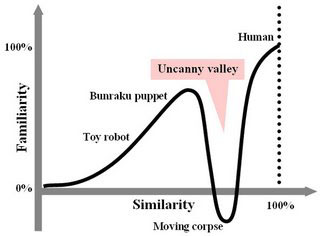 Uncanny Valley: The dropoff in humans' acceptance of robots when those creations' appearance becomes eerily lifelike.

Uncanny Valley was coined in 1970 by Japanese roboticist Masahiro Mori. From the Wikipedia entry:

Mori's hypothesis states that as a robot is made more humanlike in its appearance and motion, the emotional response from a human being to the robot will become increasingly positive and empathic, until a point is reached beyond which the response quickly becomes that of strong repulsion. However, as the appearance and motion continue to become less distinguishable from a human being, the emotional response becomes positive once more and approaches human-to-human empathy levels.

TV Tropes, the resource for everything television-related, has this to say about the Uncanny Valley:

The Uncanny Valley may be a deep, instinctual reaction; it steers humans, on an automatic level, away from humans who are dead, diseased, or deformed (which is often an indication of poor health). It may also alert "normal" people to the presence of mental problems which would render someone unfit for inclusion in a peer group. In that way, the theory goes, the Uncanny Valley is a protection against associating with sources of infection. Of course, backfires of such beneficial instincts might also have a large part in the development of racist sentiment.

This might explain why we like Ridiculously Human Robots, even if they don't make a lot of intuitive sense; they are just far enough out of the Uncanny Valley not to bother us.

This idea has recently been applied to CG [computer-generated] effects. While it's become very easy for programs to simulate textures and skin tones, convincing movement and facial expressions aren't always as simple. This can produce an effect where the character comes off as a zombie, if a production company is going for a purely realistic human look.

Uncanny Valley has been appearing lately in discussions of the new James Cameron release Avatar, which uses sophisticated CG effects. Reviewing the film in the Chicago Sun-Times, Roger Ebert calls  it "sensational entertainment" and "predestined to launch a cult." Of Avatar's "technical breakthrough," he writes:

The Na'vi are embodied through motion capture techniques, convincingly. They look like specific, persuasive individuals, yet sidestep the eerie Uncanny Valley effect.

Meanwhile, Jim Emerson, also of the Sun-Times, invokes the Uncanny Valley in his own review of Avatar—and arrives at a conclusion diametrically opposed to Ebert's:

The imagery dive-bombs into the Uncanny Valley in the very first shot and never climbs back out of it: An aerial representation of a rain-forest is impressively full of detail but looks utterly artificial, the CGI equivalent of Astroturf.

UPDATE: Michele Hush forwards a link to her recent post about the Uncanny Valley, which includes more background about uncanniness ("that creepy feeling") and CGI artist Jonathan Joly's version of the Uncanny Valley chart, which adds stuffed animals, Disney movies, and Ann Coulter to the mix.

Watch a 2½-minute compilation of video clips demonstrating the full robot-human spectrum, including many examples that reside in the Uncanny Valley.

Posted at 09:39 AM in Film, Technology, Word of the Week | Permalink

Sounds like Emerson doesn't quite grok the meaning of "uncanny valley"--it's meant only to apply to humanoids, not entire panoramas.

WOW!! Thanks for the Avatar trailer. I was wearing my new headphones and got blown away. I may be wrong but it seems that the robots in the Uncanny Valley have poorly done eyes and mouths. My personal Uncanny Valley takes place every morning in front of the mirror.

Sigmund Freud probably helped this "canny" word into description with his article "The Uncanny" ([Das Unheimliche] (1919)) and perhaps part of the "mirror" in the Uncanny Valley. It seems the first film with it in recent times would be "A.I." the unfinished Stanley Kubrick film, completed by Steven Spielberg.