Where Did They Get That Name?

Brand names come from myriad sources. Here are some names with unusual provenances: 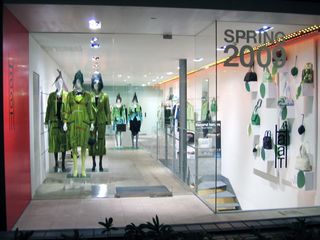 * Don't bother to search the Saks site; you won't find it. A salesperson told me that only the San Francisco Saks carries the line, which is so stunning and unusual it literally stopped me in my tracks as I rounded a corner to the escalator. I lingered long enough to try on a soft chocolate-brown knitted vest with five head-size openings and a drawstring on one side. It was fabulous. Trust me.

Posted at 07:19 AM in Cars and Motorcycles, Fashion, How They Got That Name, Naming, Real Estate, Wine & Spirits | Permalink

OK, I live in a region where people actually would pronounce "Haat" that way, and I still pictured it like someone whining "hat" in an annoying nasally voice. It also suggests "hate." Nothing about this name gives me a warm, fuzzy, open-walleted feeling.

Meanwhile, what about this?

Apparently it's supposed to be pronounced "Q," but that's now how I pronounce Q-U-E. Who wants to name their product the "What?"?

In northern part of India, the made-up word "Haat", is also pronounced and considered as "Hot". So who knows, the clothing line designer had this concept in mind. However, the name is really thought-provoking and nice making many to speculates differently, I believe! "Haat" can not more mean as "Village" but "Cottage" for sure!

Durr. I MEANT TO SAY that I live where people would pronounce "HEART" that way.

Actually, the quirky capitalization of HaaT might be more than just brandese. The Sanskrit word has a retroflex stop, which is written with a capital T when it can't be written the traditional way (with a dot underneath). However, there's no reason for the double A.

I love the name HaaT, not least because it instantly makes me think 'heart'.

@Speeding Offence: Ah, that's because you're in the UK. I look at it and hear a drawn-out, slightly whiny "hat."