« The Tastiest Suffix | Main | Hanging Noodles for the Holidays »

The City • The Committee • And You

Things are looking different, if not exactly up, in Philadelphia. A couple of weeks ago Mayor Michael Nutter unveiled the city's new logo and slogan:

Does the logo look a bit pedestrian? That may be because it was designed (pro bono) by a committee of 65 (!) advertising and PR folks led by local branding agency Star Group. In his Brand New critique ("Phail-adelphia"—ouch!), designer Armin Vit leaves no word unminced: the choice of the Liberty Bell is "uninspiring"; the font is "the drably default, designed-for-web" Trebuchet MS; the logo "fails to deliver any emotional or cultural connection." And the coup de grâce: "Also, it doesn’t take a bell expert to notice that the wooden hold at the top of the bell will physically never tilt that way." Well, obviously.

Fast Company's Cliff Kuang is similarly unmoved: He calls it a "crime in progress" and recommends charging Star Group with "Felonious Intent to Deceive, via Meaningless Business Jargon, Lame-Ass Catch Phrases, and Conspicuously Bad Work (hidden from hyperlinking by a Flash website)."

Did someone say "lame-ass catchphrases"? That's my métier, so let's take a look at "Life • Liberty • And You," which replaces "The Place That Loves You Back" and which co-exists with "With Love, Philadelphia," introduced by the Greater Philadelphia Tourism Marketing Department in May. (Why Philly's never gone with W.C. Fields's "On the whole, I'd rather be in Philadelphia" is a mystery to me.)

"Life • Liberty • And You" derives, of course, from the Declaration of Independence's "life, liberty, and the pursuit of happiness," which can hardly be called a lame-ass catchphrase. (By the way, "The Pursuit of Happiness" is the title of Maira Kalman's gorgeously illustrated New York Times blog.)

As for "you"-as-punchline, by now it's 100 percent predictable. The second person familiar is all-too-familiar in advertising now; I even wrote a blog post about it. I assumed the "you" in the Philly slogan was "you tourists," but Mayor Nutter—don't you love saying "Mayor Nutter"?—said it's "a call to action for individuals to help market the city, including its meetings and conventions business." (I'm quoting the Philadelphia Business Journal, which quoted Nutter indirectly.)

And while Philadelphia does have a legitimate claim to "life, liberty, and the pursuit of happiness," the phrase has been soiled once too often by commerce. Consider these car ads. The one on the left, from Honda, appeared in 2005. The one on the right, from Cadillac, was introduced a year later. The only difference: a serial comma. 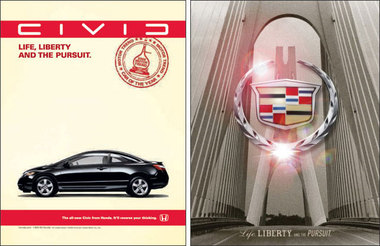 As for Philadelphia's version, it dispenses with commas altogether in favor of PowerPoint-ish bullet points. And it misses an opportunity, as the Philadelphia Inquirer noted in an editorial-board blog post:

This being Philly, we wonder if any thought was given to "Life. Liberty. And Yo."

On the whole, that sounds like an idea worth pursuing.

Posted at 08:19 AM in Advertising, Branding, Cars and Motorcycles, Design, Slogans and Taglines | Permalink

Overall, the best you can say about this rebranding is that it's just flat out amateurish - which is the worst thing you can say for a city trying to play in the "big leagues" of its neighbours like NYC, Boston, even lowly Pittsburgh.

On the whole, I'd rather be in Newark. And that's saying a lot.

If it's any consolation, it could have been, "Philadelphia 'R' us" or a bell with a happy face. I might have offered,"Feel-adelphia- and crack a smile!"

Nice use of the phrase "coup de grace" (sorry no circumflex)! I happened to come across your comment about that phrase on 101 cookbooks and the churlish comments of some other cooks. Interesting analysis of this logo. It's oddly shallow isn't it, especially for a city so central to the founding of our country.

is it Nutter by name, nutter by nature? great post btw.