Happy Festivus, the holiday for the rest of us! The aluminum pole has been lofted, the Feats of Strength admired. Now it's time for the Airing of Grievances, my favorite ritual of all. I've been saving up grievous examples for more than a month in anticipation of this special day. Too negative for you? Go watch It's a Wonderful Life.

Grievance the First. This Bloomingdale's ad, which ran in the New York Times on Dec. 7, merits a citation from the Apostrophe Abuse posse: 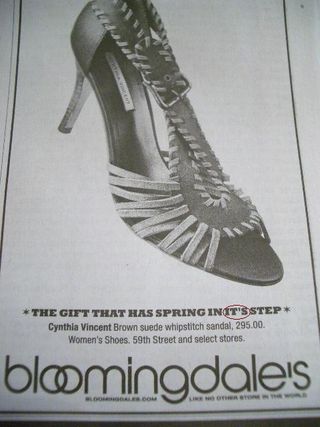 Its, dammit. Its. You may send me a free pair of overpriced shoes for my troubles.

Grievance the Second: From an online ad for "Copywriting Experts (Native English Writer Only)" on the Pro Freelance Projects site:

Do you know how to write web copy that make people click? Do your words make people inch until they do what you want them to do? We’re looking for an on going copywriter and willing to pay great rate for the right person…

Grievance the Third: From a story in the Your Home section of the Toronto Star about actor-turned-DIY-instructor Mag Ruffman:

To that end, she has created a pyramid based on Mazlo's hierarchy of needs, that she "heard in first-year university" and then applied to home shows.

Grievance the Fourth: From a brief story about actor James McAvoy published in the Los Angeles Times on Dec. 3:

That would be faun, a creature that's half human, half goat. A fawn is a young deer. (Hat tip: Carroll Lachnit.)

Grievance the Fifth: A Dec. 3 story about memoirist Rhoda Janzen written by Cathy Horyn, longtime style reporter for the New York Times, contained this gem of an eggcorn in the lede*:

The New York Hilton. It is the breakfast hour, the day before Thanksgiving, and the lobby is busy with clean-looking families who are up and Adam, ready to set off in their varsity-letter jackets and Rockports for some holiday shopping, maybe a show.

The idiom is "up and at 'em." Even in Manhattan.

Grievance the Sixth: This one comes, once again, from the sharp-eyed Carroll Lachnit, who spotted it in a press release titled "Networking Strategies for the Holiday Office Party, Do's and Don'ts." I'll let Carroll set it up for you:

I get a lot of PR pitches, and the bad ones are usually bad for all the usual reasons. This one is a little worse: 1) a misspelling of "liquor" as "liquer" (or maybe for "liqueur," if people get blasted on Chambord at holiday parties), and 2) signing off with "All Heart." Ick.

And then there's this, smack in the middle of the release:

Does the PR person actually not know that the word is actually "segue"? Or has she just opted to fuse the word with its product persona so the reader will visualize that with this introduction in hand, she can effortlessly (if somewhat geekishly) glide her way to a new job?

My two cents: If I have to motor around on a ridiculous two-wheeler to meet Bruce Springsteen after the party, so be it. (What? He's the Boss, right?)

And one more thing: I wrote about the worldwide Complaints Choir phenomenon last year. I'm pleased to report that the movement continues to gather momentum, and if we're lucky we'll soon see the Complaints Choir movie. Here's the trailer:

And do try to have a holiday that's perfect in every way. See you next week.

* Lead paragraph. "Lede" is the way journalists spell it.

DISCLAIMER: All errors in this post are corollaries of Muphry's Law, a k a McKean's Law.

re: Grievance the Second: at least it's obvious why they're seeking "Copywriting Experts". They understand that they need some.

I thought Muphrey's Laws was very funny. Glad I never have such erors.

Pet grievance: the ever more noticeable misuse of 'you' instead of 'your': as in "Shop today to get you best savings on [whatever]". No one is proofreading anymore: as long as there are no little red dots under any of the words, they presume everything is hunky-dory.