« November Linkfest | Main | But Enough About Me » 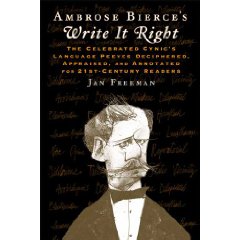 If you're familiar with Ambrose Bierce (1842-1914?), it's most likely because you've read his most famous short story, "An Occurrence at Owl Creek Bridge," or his satiric and widely quoted Devil's Dictionary.* But like many journalists and fiction writers, Bierce also considered himself a usage maven. He collected several hundred of his peeves in a 1909 book, Write It Right: A Little Blacklist of Literary Faults.

Write It Right might be forgotten today if Theodore Bernstein hadn't reprinted it as an appendix to his own usage book, Miss Thistlebottom's Hobgoblins, published in 1971. That's where Jan Freeman, who now writes The Word, the Boston Globe's language blog, first encountered it. Here's how she remembers Bierce's advice:

In my copyediting days, I would dip into it now and then, more for entertainment than for guidance. A fair number of the topics were still-familiar stylebook entries—literally for figuratively, less vs. fewer, over and more than—but many more were baffling. Why was the term landed estate "dreadful"? What was wrong with "I'm afraid it will rain"? Did other critics think "spend the summer" was bad English? Or "quit smoking," or "it was a success"?

Those questions appear in her introduction to Ambrose Bierce's Write It Right: The Celebrated Cynic's Language Peeves Deciphered, Appraised, and Annotated for 21st-Century Readers**, Freeman's sprightly update of Bierce's century-old book. In it, Freeman compares Bierce's advice to that of his contemporaries (Bierce often made up his own rules) and to our own language standards. And she salts her commentary with dishy tidbits. Why, for example, did Bierce, and Bierce alone, declare build a fire unacceptable? (He preferred make a fire.) Could it have been, as Freeman suggests, because Bierce's rival Jack London had just published "To Build a Fire" in 1909?

Like many of his contemporaries, Bierce shuddered at Americanisms such as dirt for earth, run for manage, dress for gown, and pants for trousers. Freeman observes that the still-young United States of Bierce's day had "status anxiety" about the American language; many educated Americans, she writes, "worried that their native locutions were less refined than whatever the Brits were saying." Bierce also hated neologisms, including jeopardize ("the 'finalize' of the 19th century," Freeman writes; Bierce preferred jeopard) and electrocution (Bierce: "no less than disgusting").

Most interesting to me is Bierce's antipathy toward borrowings from the business world. Endorse to mean approve "is a commercial word, having insufficient dignity for literary use," he wrote. I take no stock in it was "disagreeably commercial"; stock, he wrote, should be replaced with faith. He even took umbrage at pay attention and pay a visit. "One cannot be indebted to a place," he sniffed. Freeman's comment: "Bierce's anti-commercial antennae are oversensitive, leading him to read 'pay attention' as a vulgar monetary metaphor. ... [He] seems to be alone in his animus."

The words may have changed, but hostility toward "commercial" language continues today. Just Google "business buzzwords" or check Wikipedia to find long, gleefully compiled lists. I confess I still find monetize grating (and gratuitous), and my ears throb when I hear buy-in, client-centric, and proactive. But language is constantly changing, and I may be on history's losing side, as Bierce (mostly) was. Here's Freeman's sage advice:

Would a little more historical knowledge help us keep our cool in the face of language change? Can we understand that incentivize may be just the new jeopardize, a scapegoat for our times, and not a sign that civilization is doomed?

OK, I'm paying attention. Buy a copy of Freeman's book for yourself, and another for your own favorite language maven.

* All three of these links go to to the Ambrose Bierce Project, an online library of the complete text of all of Bierce's published works.

** Dear Federal Trade Commission: I received a free copy of Ambrose Bierce's Write It Right from the publisher, Walker & Company.

The "business style" I dislike most is the overdone self-inquiry used by executives who want to sound important: "Could we have handled this merger better? Yes, but every merger has its difficulties." Why can't they just utter a damn declarative sentence?

I think that, unfortunately, the question has been answered by history itself: since the beginning of English, writers been scolded for using the language wrong or for corrupting it, based almost entirely on the scolders' idiosyncratic notions of what constitutes "good" language. The fact that (language) history marches on without being deflected in the slightest by the opinions of the mavens seems to be entirely lost on each new generation of scolders.

Because, of course, the issues at stake are almost entirely social and not linguistic.

We can't do MUCH about the language, as the mike points out, but, like us v. the weather these days, we most certainly DO have an effect. There's a huge difference between being creative with language and, in an effort to be hip, keeping your ear so close to the ground that you pick up some of the stuff that would normally only befoul your shoes.

Take the current passion for "sea change" mutations. Does anyone want to argue that the English language wouldn't be a better place if we managed to preserve the wonderment of the usage in Ariel's song?

Full fathom five thy father lies;
Of his bones are coral made;
Those are pearls that were his eyes
Nothing of him that doth fade
But doth suffer a sea-change
Into something rich and strange.

Shakespeare liked to use "sea" to mean "lots" ("to take arms against a sea of oppressions") , so it's not hard to see how casual readers might misunderstand its usage here. But we shouldn't abandon careful usage just because the task seems impossibly large.

A year and a half ago a young reporter friend took the degradation process another level deeper and published the following sentence:

"That 1977 line in the sand, designating some public spaces as smoke-free, was the beginning of a slow process that continued all the way through the sea-changing law of 1998, when Californians lost the right to smoke in bars, or gained the right to work in one without being poisoned, depending on whom you ask."

Notice how the original usage has now mutated so far that it's the sea that gets changed, instead of doing the changing. Indeed, it drove me near to despair. But that's one reporter who has now, belatedly, read the Tempest. If he ever uses "sea change" again, he'll use it right.

I love the selection of Bierce's pet peeves. As well as being a great name for a veterinary chain, they are something you cherish at the same time you're appalled; we should keep both aspects in mind and become less curmudgeonly advocates. "Landed estate" is redundant, probably extrapolated from landed property (related to another infelicitious usage, "real estate", which is immovable property, as opposed to personal property like clothing). I wish MORE people, not fewer, had complained about "paying a visit" while it was still possible to make a difference, because it's a sad statement about our personal relations that the burdensome aspect of seeing acquaintances now seems to feel like its most natural quality. And I don't have much use for how "afraid" has crept into our usage to express regret, or, for that matter how "hopefully" has become little more than a particle. And after the long migration of "awfully", I wouldn't mind it, from time to time, expressing a little wonderment again too.

Sure, words get coined, but the metaphor doesn't go so far as to imply that bad ones inevitably drive out good ones. Even when bad usage seems to hold all the ground, the good stuff is still hanging around, quietly continuing to make a better impression, biding its time. Two years ago I scoffed at the idea that a half-Kenyan from Hawaii would be president a scant year later; we can take back our language too.