Word of the Week: Mockolate 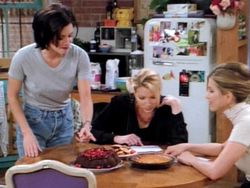 Mockolate: A derisive term for an ingredient used as a chocolate substitute that contains cocoa solids but no cocoa butter. Cheaper than real chocolate, mockolate is sometimes found in inexpensive confections and baked goods, sometimes described as "chocolate-y coating" or "milk compound chocolate."

Mockolate hasn't yet shown up in published dictionaries. (Mocktail, however, appears in the fourth edition of the American Heritage Dictionary of the English Language, published in 2006.) The online Double-Tongued Dictionary provides a single citation for mockolate, from a 2008 Seattle Post-Intelligencer article, "On a Mission for 'True' Chocolate." The article quotes molecular biologist Andy McShea, chief operating officer of Theo Chocolate, who provides a more general definition of the word than the one I've provided above:

Andy McShea is a Harvard-trained molecular biologist using his scientific talent in Seattle to promote "true chocolate" and steer consumers away from inadvertently ingesting all that other brown sweet stuff he says is often unhealthy, morally questionable and not the real thing.

"We like to call it 'mockolate,' " said McShea, his British accent rising with indignation. "Most of the stuff sold as chocolate out in the world today is not really chocolate."

But mockolate predates that citation. CandyBlog, which reviews confections from around the world, wrote in October 2005 that the brown coating on Almond Roca and Cashew is "not real chocolate, but it's pretty good mockolate." The word gained currency during the spring of 2007, when the U.S. Food and Drug Administration was considering proposed changes to food standards to allow “a vegetable fat in place of another vegetable fat named in the standard (e.g., cacao fat)” when manufacturing chocolate. "Chocolate lovers read that as a direct assault on their palates," reported the Washington Post:

Chocolate purists, of which there are apparently many, have undertaken a grassroots letter-writing campaign to the FDA to inform the agency that such a change to the standards is just not okay with them. More than 225 comments to the petition have been processed so far by the agency, and chocolate bloggers are pressing for more. In the annals of bureaucratic Washington battles, this is a sweet one.

Food bloggers took up the cause, and Guittard, a premium chocolate manufacturer based in the Bay Area since 1868, put up a website, www.don'tmesswithourchocolate.com (since removed). In the end the FDA rejected the proposed changes.

However, mockolate can still be found in the candy aisle. The candy blog ZOMG, Candy! diligently alerts consumer to mockolate in confections such as 5th Avenue.

The earliest citation of mockolate I could find was in the Nov. 16, 1995, episode of Friends, "The One with the List," in which Monica gets a job making food with a synthetic chocolate substitute called Mockolate (presumably meant to be a brand name), which has "a taste that'll last till Christmas." A commenter on CandyBlog helpfully provided relevant chunks of dialogue from that episode. Here's one:

MONICA: Ok, this is pumpkin pie with mockolate cookie crumb crust. This is mockolate cranberry cake, and these are mockolate chip cookies. Just like the Indians served.

RACHEL: Oh my god, I can’t believe you let me put this in my mouth.

PHOEBE: Oh, oh sweet lord! This is what evil must taste like!

Photo from EW.com. (That's EW as in Entertainment Weekly, not ewwww.)

Hah! Excellent piece, I'll point everyone to it from now on. I had no idea that I was such an early adopter of the term.

(Check at the 3:25 mark for the mockolate montage.)

When I first started reading I thought you were talking about mocha latte coffees - and assumed that it was a US spelling. But then it all made sense when you mentioned the British accent (although surely the 'rising with indignation' is an Australian thing?).

Over here, we talk about 'mockumentary' films and television - like 'Spinal Tap', 'Best in Show' or 'The Office'. You probably do too, don't you?

And in London there are those who speak 'mockney', which is a fake cockney accent used by people who are pretending to be less well educated than they really are. People use it to try and blend in - I've tried using it myself but, sadly, it didn't work.

@The Dangling Modifier: Yes, we've used "mockumentary" on this side of the pond since at least the 1980s.

For a comprehensive and amusing list of "mock-" coinages, see Urban Dictionary. My favorites are mocksucker and mockward: http://www.urbandictionary.com/define.php?term=mockward

The Dangling Modifier - Mockney is a great word! We have something similar in the states but no great term for it - it's that urban gangsta speak, sometimes mixed with some Spanish. (It's rather amusing to see gangly pre-teens from rural Oklahoma use it.)

Arrgh I hate that stuff, a taste that's 90% sugar and 10% chocolate. Boycott Mocolate!

No wait, that sounds like a George Bernard Shaw character!