« Word of the Week: Mockolate | Main | Any Color, As Long As It's Printable » 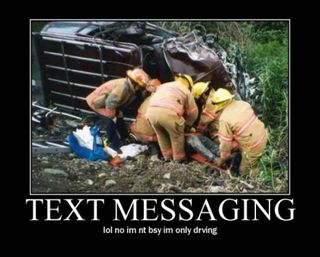 A sign of the times surely, distracted driving is another reflection – and consequence – of our ongoing romance with all things digital and mobile and the enhanced capabilities they provide. While it now may be easier and quicker to feed our multitasking habits, it is not always safe, and many jurisdictions are formalizing that position by making it a crime to text or otherwise use a cellphone while driving. In other words, CrackBerry users beware, lest a charge of DWD (driving while distracted) or DWT (driving while texting) stain your record, not to mention endanger yourself and others.

Distracted driving is an example of hypallage, also known as "transferred epithet." Translation: It isn't the driving that's distracted, but the driver. In today's edition of Word Routes, Ben Zimmer expands on hypallage and on Word of the Year (WOTY) contests.

Webster's New World Dictionary always makes one of the earliest WOTY announcements. Other WOTY selections will follow in the next couple of months. The big kahuna of such contests is sponsored by the American Dialect Society, which will reveal its 2009 WOTY at the society's annual meeting, to be held in Baltimore in January.

Teresa Long, a commentary writer for Workforce Management, used the term "intexticated" in a recent article. I thought that was pretty clever. Story is here: http://www.workforce.com/archive/feature/26/73/47/index.php