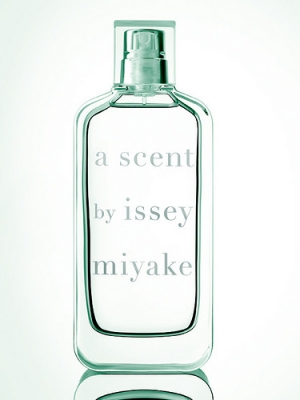 A Scent: The first new fragrance from Japanese designer Issey Miyake in 12 years appears to have a generic name, but look again. The wordmark is all lower case, with just a breath of space distinguishing it from ascent—which of course is no accident. (The official description says A Scent is "as beautiful and simple as the air we breathe" and that the fragrance "was designed to capture the air between earth and sky where flowers, leaves, and wood create a new olfactory perspective centered on a fresh theme: green-floral-woody.”) Reviews of both the fragrance and the name have been mixed: here's a positive commentary on both, and here's a meh. I'm an admirer of Miyake's artistry in all things, and I think A Scent is beautiful, elegant, and witty. Apart from the name and the juice, the packaging is interesting, too: The bottle is formed from a single slab of glass, and the logo is engraved on the inside.

AFAR: A strong, evocative, aspirational name for a new travel magazine aimed at "experiential travelers." The name is perfectly supported by the tagline: "Where Travel Can Take You." Afar strikes the ear as slightly quaint—hardly surprising, as the word has been in the English lexicon since the 12th century. Yet its meaning and pronunciation are transparent. This year was not an auspicious one in which to launch a newsstand magazine, but AFAR's editorial and business staff, who hail from respected publications such as Health, Mother Jones, and Dwell, would seem to be up to the challenge.

Bare: Fashion ... in Berkeley? An oxymoron in some parts of that defiantly dowdy town, but the Cal campus can be a stylishly different story. Three cheers for the students behind Bare, a quarterly magazine and a blog whose name is a cheeky twist on the name of the university's athletic teams: the Golden Bears. It may even be a nod to the late Andrew (Naked Guy) Martinez, famous for strolling around the campus in the altogether.

Qooq: It's a French invention and a French site, but it's pronounced "cook" and the appeal is bilingual: It's a kitchen computer with a built-in meal planner, cooking videos, and lots more. I love the look of the logo, and I'm tickled by the tagline: "Je Qooq, Donc Je Suis." ("I Qooq, Therefore I Am.") Is it coincidental, I wonder, that "Qooq" is reminiscent of coq, as in the French national symbol, le coq gaulois? The Qooq site is mesmerizing even if you don't understand French, but if you want more, check out this English-language review. Le Qooq, c'est chic!

AFAR is the best of the lot by far. A scent is rising / wafting / filling the room. Bare: well covered.

Qooq is not completely done all the way through for me. It scans as "Kook" or because of the repeated letter forms as "Qoq".

Of course, A Scent also comes off as "assent"--which can be good news or bad news, depending on who's responding to the scent.

Thanks for the post! I studied linguistics, french and english (I am Venezuelan) Miyake has always been playful with words and the fact that he said he "is willing to design even with words" gained my respect. a scent !! I love it!
He released years ago "L'EAU D'ISSEY" (all capitals on purpose this time) and it's french for "Issey's water" but when you say it it sounds like L'odyssey... that was 10 years ago, it still is my scent nowadays... :)

@Leo: Thanks for that information. I'd wondered whether "L'eau d'Issey" had a second meaning; it doesn't sound close enough to English "odyssey" for me to have made the connection. I can hear it in French, though!