How Butterball Got Its Name 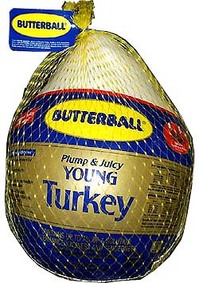 Since 1981, top-selling turkey brand Butterball has maintained a toll-free Turkey Talk-Line every November and December. This year, you can tweet your questions to the turkey company. But here's a question the turkey talkers probably don't get asked: Where did the Butterball name came from?

Answer: "Butterball" was originally registered as a trademark on June 11, 1940, by Ada Walker of Wyoming, Ohio. (I haven't been able to find out what Ms. Walker was using the name for.) In 1951, Leo Peters, an employee of the Chicago meat processor Swift and Co., purchased the mark (for $10, according to one account). According to his son, Mark, Leo wasn't sure at first what he'd use it for, either.

Presently, though, he found a match for the name. Leo claimed to have developed the Butterball turkey while he was at Swift; he licensed the Butterball name to Swift for ten years before selling it to the company for an unknown price. In the transaction he retained the rights to the use of the name for butter products. Butterball Farms, the company he founded in 1956 (as Peters Pak), is still in operation today in Grand Rapids, Michigan; Mark Peters is its CEO. The company specializes in embossed butter pats for hotels and restaurants.

In my non-legal-but-still-opinionated opinion, Butterball is a stronger mark for turkey (suggestive) than for butter (descriptive).

Here's a list of the top 10 turkey questions fielded by the Butterball call center. And here, verified by Snopes, are some of the oddest turkey-hotline calls.

Many thanks to Mark Allen (@EditorMark on Twitter), who tweeted the gist of this story.

Happy Thanksgiving to all my readers!

Posted at 10:08 AM in Food and Drink, How They Got That Name, Naming, Trademark | Permalink

I saw an article about this in this morning's paper. They field some very strange questions every year, like "Is it OK to put the turkey in the bathtub with the kids?"

Presumably to defrost it, or so I'd imagine.

It's interesting that you say that "Butterball" is a stronger brand for turkey than for butter. Having grown up in the pre-free-range days with Butterball as the pre-eminent brand of gobblers, the name is so associated for me with turkeys that I would find it startling to see it used in any other context. Thus the power of endlessly repeated TV commercials.