« Word of the Week: Charticle | Main | The Annunciation »

The new Google/Verizon mobile device, the Droid, went on sale over the weekend, supported by a $100 million ad campaign. Here's what the wrap on my Sunday San Francisco Chronicle looked like: 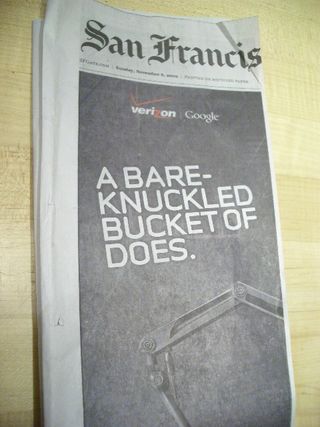 A bucket of does? A couple of does, unbucketed.

Only the tagline, buried at the bottom of the ad, solves the riddle: "In a world of doesn't, Droid does."

What we have here, folks, is anthimeria gone bad: a verb (third-person, present-tense to do) treated as a noun. And because said verb ends in an S and is spelled exactly the same as a real noun, we end up in a bucketful of don't go there.

Droid (the name is a truncation of Google's Android operating system) is taking a dark, sci-fi approach in its marketing. According to The Business Insider, the target market of the campaign "is the tech-savvy, early adopter young male in his 20s or 30s who cares more about functionality and productivity, and tends to eschew certain lifestyle brands that attract herds of followers." It's the antithesis of chirpy iPhone positioning:  early Droid ads attacked the iPhone as "iDon't."

...I wondered whether the Droid should be renamed the Dread.

The integrated campaign—the largest in Verizon's history— was executed by McGarryBowen, New York.

Posted at 08:09 AM in Advertising, Anthimeria, Naming, Slogans and Taglines, Technology, They Said WHAT???, Usage | Permalink

Great post Nancy! Just wanted to let you know that your article inspired me: