Word of the Week: Subitize 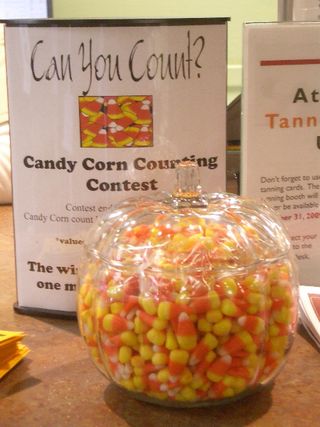 Subitize: To immediately apprehend, without counting, the number of items in a small sample. Pronounced with a short u; stress on the first syllable. From Latin subito, sudden.

<<< Do not attempt to subitize the candy corn.

Subitize was coined in 1949 by E. L. Kaufman, et al., in "The Discrimination of Visual Number," published in the American Journal of Psychology. Later research found that babies can subitize quantities up to three. Adults don't do significantly better: most can subitize only four or five items. Chimpanzees can subitize up to six.

Can you subitize faster than a chimp? Take the test.

Posted at 10:49 AM in Numbers, Psychology, Word of the Week | Permalink

There are no standards to compare yourself too, so it's not much of a test. Of course, it's self-proctored, so it doesn't have much reliability anyway....

Interesting. The word was coined by an American so it's spelt with a 'z'. We Brits accept that spelling (well, the BBC, the arbiter of all that is British, does).

I wonder; if it had been coined by a Brit -- and therefore spelt 'subitise' -- would the US have accepted that spelling or would they have Americanised it?