« Our Special This Evening Is Euphemism in Drawn Butter | Main | Word of the Week: Calor Licitantis » 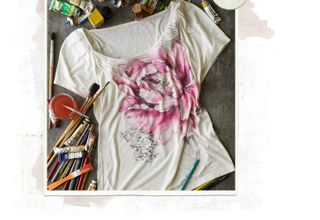 Romantically staged and evocatively photographed, every Anthropologie catalog is a visual feast. The merchandise—women's clothing and accessories along with furniture and home decor—shimmers in soft light; the models look pensive and intelligent (they often perch in libraries) in their winsomely mismatched, determinedly non-mass-market outfits.

And the best part, at least for this reader? Each item in the catalog (and website) has a name. And not just a boring descriptor, either. Anthropologie product names are literary, evocative, and sometimes surprisingly erudite.

Here, for example, are the Road Not Taken Boots: The catalog gives only the style number and the price ($278), but the website (which mostly dispenses with model shots) waxes eloquent: "Diverging pathways of coppery stitches and metal discs chart a course atop soft, ebony leather."

Too swoony for Robert Frost, perhaps, but still: such vivid, sensual language.

I'd never heard of helenium before I encountered the Drenched Helenium Tee: 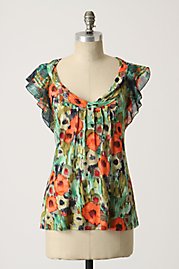 It's not the sort of thing I'd wear. But I loved learning about helenium (also known, less impressively, as common sneezeweed), and I enjoyed drifting even farther down the primrose path when I read that the top is "dripping with watercolor heucheras from cowlneck to pleated yoke." Heucheras? Ah: coral bells.

This season also brings a not-very-remarkable black dress that suddenly seems interesting when you know it's called Nights at the Lyceum; a colorful Felted Amaranthine Pillow (I had to look that one up, too); and the cable-knit Solden Scarf (Sölden: "a municipality in the Ötztal valley of Tyrol, Austria"—Wikipedia). In past seasons Anthropologie offered the Intentionally Forgetful Cardigan, the Reading Chair Cardigan, the Street Poet Trench, the Tennessee Waltz Blouse, the Solitudinarian Cardigan, the Turn-of-Phrase T-Straps, and the Clementine Clafoutis Peep-Toes. They're not just product names; they're a cast of characters.

As far as I can tell, no other retailers in Anthropologie's market sector go to such extremes in naming their products. Banana Republic sells "Jackson" and "Madison" pants, but those names are fit codes, not personality indicators. J. Crew occasionally bestows a woman's name on an item (to honor a staff designer, perhaps?), but "Frances stripe ruffled tuxedo shirt" doesn't tell me a story the way, say, "Museum of Modern Birds Dress" (Anthropologie, Autumn 2008) does. And most of J. Crew's product names are similar to "Tailored wool cowlneck dress." No romance there.

Why bother with elaborately crafted names and backstories? Who (besides me) cares that a handbag is named Frill-Seeker Satchel instead of something straightforward and descriptive? Who appreciates a five-syllable product name with Kafkaesque overtones?

Anthropologie has answers to those questions. The Anthropologie customer is "well-read and well-traveled," company president Glen Senk told Fast Company in 2002. (The article is a fascinating, detailed exploration of the Anthropologie ethos and M.O.) "She is very aware -- she gets our references, whether it's to a town in Europe or to a book or a movie. She's urban minded. She's into cooking, gardening, and wine. She has a natural curiosity about the world. She's relatively fit."

Oh, there's some writing, at least in the stores I've visited. (There are 90 stores in the United States and Canada.) Here's a sign I saw recently in the Berkeley store: 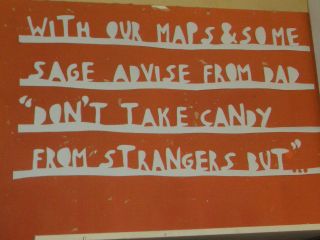 A+ for craft, A for atmosphere, C- for spelling. (The noun is advice, not advise. I'll say it again: Hire. A. Proofreader.) Plus: The sign is positioned so high on a wall that it's doubtful anyone except your determined correspondent has ever read it.

Instead of stories, the stores have piped-in music. Lots and lots of loud, relentless, pretentious music, often in French. Maybe the idea is to fill your ears with sound so you don't notice that the merchandise isn't quite so charming when it's simply stacked on display units. The chain has never advertised, so there's no overarching message, no headlines or copy to borrow for environmental branding. True, the catalog serves as a multi-page ad. But it doesn't function as a sales tool. There's no order form and no product information. I couldn't even find the web address in the October issue. Even if the objective is only to drive store traffic, what a missed opportunity!

It's a puzzlement. In a sidebar, Fast Company summarized Anthropologie's merchandising "secrets," focusing on the brick-and-mortar stores. Here's the "secret" that leaped out at me:

Name Everything The Anthropologie merchandising mix is so dynamic, richly layered, and dense with references that it's hard to keep it straight. In the buying department, each season's collection is organized into three companywide categories (feminine, ethnic, and modern) that are then refined and named at the department level. The feminine line of bedding for Fall 2003 is called "Estella." In the visual department, visual director Kristin Norris concocts names for every vignette -- Angels & Insects, The Collectors -- for internal use.

Why for internal use only? Don't we customers deserve the unabridged version?

I can easily envision a different, more story-driven store concept. According to the Fast Company article (which admittedly may be outdated), the average Anthropologie shopper spends an astonishing 75 minutes in the store on each visit. ("And some visits extend to an epic four hours." Wow.) Why not give this leisurely browser, who may well have been primed by the catalog and the website, some product information, an excerpt from one of the many lovely books for sale in the home-decor section, the definitions of helenium and heuchera and metamorphosis? Some meaningful, valuable copy, in other words.

And while we're making changes, how about giving us a little product copy in the catalog? Fabric content, fit description, something about what makes the garment special? Because even great naming can take the experience only so far.

(For the record, and to return to the positive note on which I began, I admit I adore the Anthropologie dressing rooms, which are spacious and so magically well lighted that I often yearn to move in permanently.)

P.S. The Sundance Channel has just begun an eight-week series, "Man Shops Globe," that follows Anthropologie buyer Keith Johnson as he searches for stuff. (Thanks, Joanna F., for that tip.) Read Double X Blog's review, "Anthropologie Rage: Why We Love to Hate the Pretty Corporate Emporium."

Good stuff! This reminded me of the late lamented J. Peterman catalogue.

@Jean: After a bankruptcy and reorganization, the J. Peterman catalog is still very much alive: http://jpeterman.com. I continue to receive the print version. But while JP's product *copy* is romantic-verging-on-florid, its product *names* are mostly descriptive (Square-Neck Dress, Double-Button Vest, etc.).