Word of the Week: Pyrocumulus

Pyrocumulus: A cumulus-type cloud triggered by a heat source on the surface. From Greek pyro- (combining form, "fire") and Latin cumulus ("heap" or "pile"). Pyrocumulus clouds may be caused by wildfires, volcanos, or nuclear explosions; the nuclear "mushroom cloud" is a type of pyrocumulus. (Source: Skybrary.)

The recent wildfires in Southern California have caused some spectacular pyrocumulus clouds. Here's a photo of one such cloud created by the Station Fire* on Mt. Wilson: 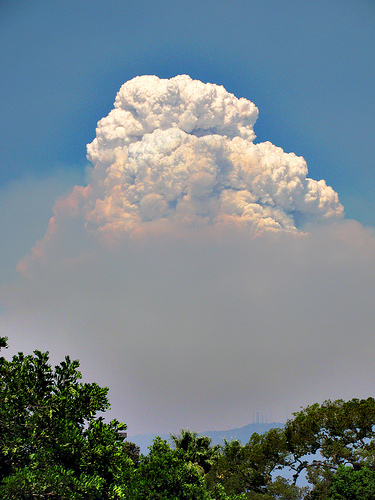 From a Flickr set by EricF2000. Used under Creative Commons license.

Watch a time-lapse video of pyrocumulus clouds caused by one of last week's wildfires in the Los Angeles area (via The Cloud Appreciation Society).

* The Station Fire was named for the communications towers on Mt. Wilson that transmit feeds to every television station in the L.A. basin.