« Dispassionate | Main | Your Slogan: It's Not About You »

For a 107-year-old company beset by falling revenue, retail chain J.C. Penney is pursuing an admirably aggressive and forward-thinking strategy. It has more than 1,000 stores, its website is the largest in the United States, and in July it opened its first-ever Manhattan store, to cheers and sneers. Its Sephora stores-within-stores, introduced in 2006, bring a sophisticated range of cosmetics to mid-market shoppers.

But I have to wonder where the strategy was when Penney named one of its private-label brands a.n.a. 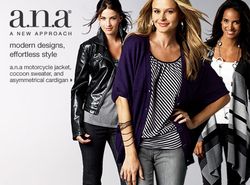 According to the website and the ads, a.n.a. stands for "a new approach." But "ana" has another meaning known to many girls and women (including, I'd venture to say, a lot of women in fashion and retail): It's slang for the eating disorder anorexia nervosa. On the sickest end of the anorexia spectrum is the self-described pro-ana movement, often personified as a girl/woman named Ana. (The counterpart among bulimics is "pro-mia," personified as Mia.)

The coincidence, if that's what it is, was picked up by Consumerist, which quoted a reader: "This seems to be an interesting choice name for a new clothing campaign, especially since the term is still widely unknown except for those directly involved with anorexia & other eating disorders."

Then there's the commenter who wrote:

The 12-year-old who lives inside my brain understands and chortles at the accidental anorexia connection, but is tantalized more by the opportunity to scrawl a letter "L" in Sharpie beside all of the incidences of "a.n.a." that will appear on the store signage. I'm not proud.

With increasing attention on the role of too-thin fashion models in promoting eating disorders, Penney's brand-name choice seems misguided. And, given Penney's wholesome, Main Street image in the marketplace, it's more than a little perverse.

Apparently a 12-year-old lives in my brain, too. That's the first definition of "ana" I came up with. Ugh.

Words failed me when I saw this, because I knew exactly what it signified. I just can't believe they went with this name.

It's self-serving, I know, but I'll say it again: you can't be a good trademark lawyer if you don't keep up with the culture and trends around you. That's how I justify reading People magazine, and I'm sticking with it.

My first impulse would be to rename a.n.a. "From Heaven" with Penny's underneath.